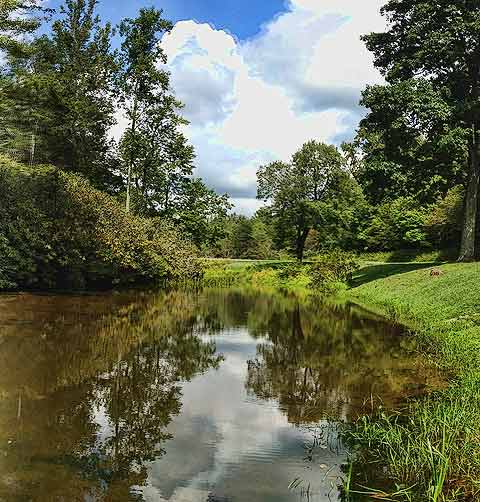 I just bookmarked and read a speculative piece by Richard Louv, (Nature’s Neurons) who wonders aloud about the impact on young brains of growing up apart from the natural world. As much as that lack, natural elements have been replaced by the man-made-and-sustained urban environment. That would seem to compound the damage of nature privation by an order of magnitude. Not only is there no green in the urban ghetto, there is far too much gray: noise, commotion, speed, a general, pervasive homogenized Â artificiality and ugliness, exhaust fumes, and broken glass. Â There is no THERE there.

I am realizing all over again how different my thinking, writing, feeling and being would be today if I’d been compelled by circumstance or forced choice to live in the city. I don’t think I’d like me very much. Our recent two-month-long encounter with the logging trucks and sound of chain saws and falling trees produced similar adrenal stress for me as sitting on that busy city four-lane. I clinched my teeth and muttered under my breath like a mad mad.

A rotund woman talked loudly in the waiting room at the auto repair shop on Peppers Ferry Road yesterday–spewing some obnoxious inappropriate monologue on her phone to the empty chair, as it were, about her whatever. I’d wait outside rather than endure that acoustic litter from one side of the small waiting room and from the wall-mounted daytime television on the other. How–and why–do people put up with this? I spotted a bench just the other side of the showroom window. I made my escape.

It was an unhealthy choice. Within seconds, already disgusted by circumstances inside, I knew the air was not good for my well-being.

I suppose the good news is that this quality of environment was so out of my ordinary, so bizarrely remarkable (but would NOT be to far too many) that I actually recorded the horrible traffic noise, and came close to making a video on my phone of the blue-smoking dump trucks across the road where some other former woods is becoming an addition to the impervious square mileage of Montgomery County. The exhaust fumes were so noxious I actually gagged.

And to think that there are people–most especially there are children–who exist for years breathing, seeing, hearing and physiologically internalizing these kinds of stressors: what have we done to our living spaces in so much of this country? And why are we not more universally appalled by the sheer trashy, counterfeit ugliness of so much of America? Why do we live so far for so long from clean, slow, quiet and beautiful? We have sold our birthright for a bowl of Wendy’s chili.

I can’t help but explain part of Floyd County’s uniqueness–the “Floyd Thing” that many wonder about–as coming from the fact that by and large, we live apart from so many of those toxic stresses of built-up “successful” places. The same is true of other small rural communities. We move by choice at a slower pace, live on a smaller, more human scale, and find our joys in dark night skies, quiet country roads, in the soil and what it brings us–green hills, checkerboard patches of forest, wildflower meadow; and a single traffic light.

Maybe the Floyd Thing comes as much from what we don’t have as what we do. We live closer to “nature” by and large, though exactly how to define that term and how to measure its benefits for children and adults waits for Richard Louv and others to illuminate. All I know is that at a certain scale and pace of life, at a certain close distance to natural beauty, there is most certainly a HERE here, and it gives us a healthy sense of both self and of place. I wish this for far more of us.

CAPTION: Rake’s Mill Pond, Blue Ridge Parkway. I stopped at this quiet, beautiful, botanically-diverse roadside pull-off on the way from last week’s far more pleasant auto-repair experience in Floyd County–at the place where the Sweet Pinesap bloomed. I’ll have a few more mushroom pictures from that excursion this week.