Top of the Food Chain–Nobody’s Home 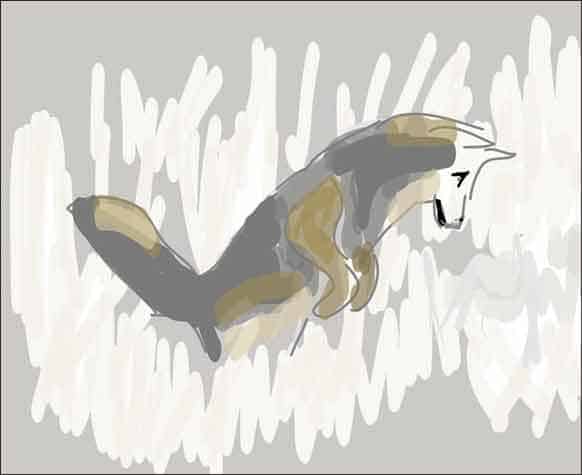 Art-like depiction of a coyote hunting by our barn
fred Posted on January 22, 2014 Posted in nature, PhotoImage 4 Comments

When the last ice age ended some twelve thousand years ago, our species began deciding who lived and who died in the animal world.

We kept the big herbivores. We began even then to eliminate the big carnivores.

And in our time, the process is nearing completion. Globally, more than 75% of large carnivores are in decline. Consequently, large and small herbivores are left to eat the leafy parts of habitats around the world. And this is turning out not to be a good thing–provided actual long-term habitat resiliency matters to anybody.

Many groups around the world are realizing that we can’t arbitrarily exterminate creatures that are inconvenient. We didn’t know enough about how this place works over the long term to have made such rash short-term decisions.

The consequence of no top of many natural food chains is what ecologists call “trophic collapse”–meaning that the weakest link of the chain is missing and things are falling apart. And not just on the Animal Planet.

Consider that the rodent population is closely tied to the numbers of foxes, coyotes, wolves and other mouse-and-rat eaters. Rodents are central to the transmission of Lyme Disease. We have sure had our share of that in Floyd County this year. How about where you live?

Meanwhile, many of us believe that the only good predator is a dead one. The Cowboy mentality dominates; and lion trophies still are a measure manhood–for the rich.

I won’t try to offer links since blog readers generally do not click them, but if you’re interested, you can find many reports during the past two months by searching DECLINE IN TOP PREDATORS.

IMAGE: a crude drawing (using Adobe Idea) upon the event of watching a beautiful coyote hunt moles just out my window last year.)

More Goose Creek encounters with the top of the food chain…

4 Comments on “Top of the Food Chain–Nobody’s Home”