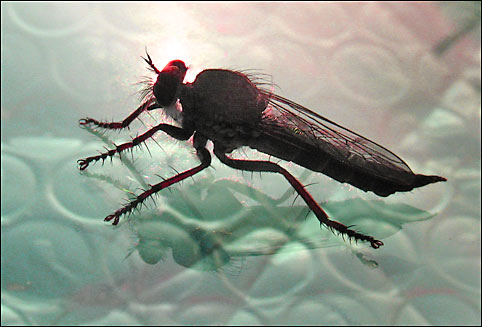 I met this fellow–suddenly and quite unexpectedly–yesterday morning when he appeared out of nowhere and perched staring hungrily at me from the top of the steering wheel.

I’m not squeamish about insects (you didn’t know that, did you?) but I’ll admit that suddenly gazing into this pretty face, looking full into those large, red, beady eyes, I was momentarily spooked.

I flicked at him and he disappeared, but several more times before I got to the clinic, I’d catch him flying quickly about out of the corner of my eye, and was prepared for the thing to perch all of a sudden on my glasses or my nose. Must. Not. Freak.

When I arrived at work and was fetching my work gear, my traveling companion cooperated by flying out the passenger door, thank you very much–and further, by landing on the windshield, posing for a picture.

Recognize his bristly beast? It’s an assassin fly or robber fly.Â  They don’t sting, but I also had some recollection that they were not entirely without off-putting aspects of their lifestyle:

The short, strong proboscis is used to stab and inject victims with saliva containing neurotoxic and proteolytic enzymes which paralyze and digest the insides; the fly then sucks the liquefied meal much like we vacuum up an ice cream soda through a straw.

I didn’t necessarily want to be sucked up through a soda straw on the way to work. (“Road workers find deflated husk of former physical therapist off Union Valley Road.) But then again, it might be just the perfect end for one amateur insect photographer overly influenced by Gary Larsen for way too many years.