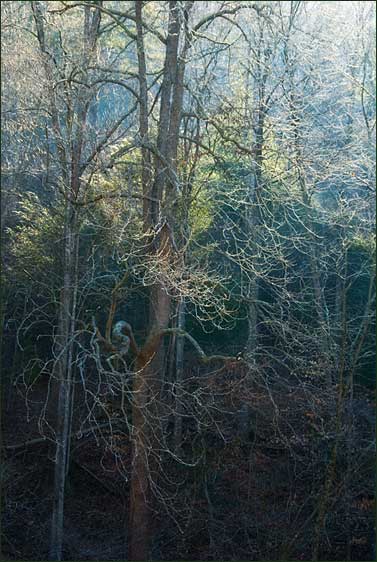 I am trolling for an agent for my book, operating under the impression that, unless I can find a representative, I won’t get my foot in the door with a “real” publisher, most of whom say in Writers’ Market that they find their prospects through the recommendations of agents or other contacts.

An agent, the logic goes, would make an end-run around my shot-in-the-dark unsolicited broadcasting of my manuscript to slush piles around the country. An agent would know the best matches between my work and receptive publishers and have networking contacts with those publishers. He or she would stand behind my work (since they operate on commission–15% domestic and 20% foreign seems to be the normal range.) If I succeed, they succeed.

Some agents listed in Writers’ Market even offer to look at queries via email. The response time and expense is a sure improvement over mass mailings of SASEs and response in months. The rejections come back almost immediately, I found out.

And the tree image? It has nothing whatsoever to do with this topic BUT is the first imported from the Nikon just now by way of the card reader I had to buy to replace the one that WOULD NOT work with the Mac. Still some glitches in how Adobe Bridge handles the image files, but MAN does it import a RAW file in a jiffy vs the old reader on the PC!

The tree here does happen to be one of the wife’s favorites, a Fraser Magnolia along the edge of the pasture that has graceful lines in every season.

2 thoughts on “Trolling, Trees and Blowing the Breeze”