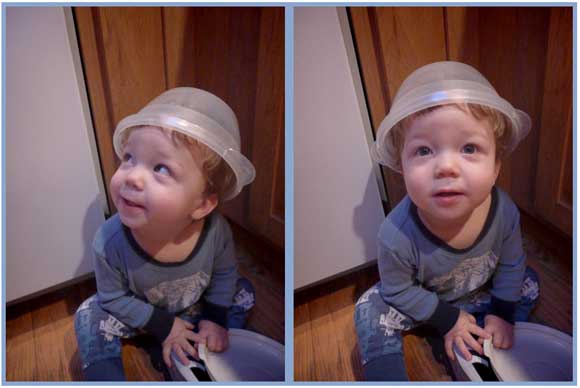 Cat in a Hat
fred Posted on December 28, 2013 Posted in family, PhotoImage 6 Comments

Busy busy morning. So much to do. So many cabinets to explore. Places to hide. Things to put on your head; And Dumpa’s.

No telling what else we’ll find to get into today, but for certain, little Ollie (Henry’s sib) will be the chief instigator.Â [Henry stayed home with his favorite nurse.]

Gandy is not performing as hoped with this smallest human in her two year’s experience. She thinks of Ollie as a bipedal rabbit, maybe.

And he is so excited to see the dog down at his level that he squeals and waves his arms wildly–her signal to freak. So far, no serious infractions by either.

But the pup will spend most of the remaining Ollie time in our bedroom behind closed doors or outside–both places, barking in an irritated tone.

By Ollie’s next visit (around 2017 by historical patterns) the two of them will get along much better.

I gotta go. I have a command performance to read the same book, again, one more time.