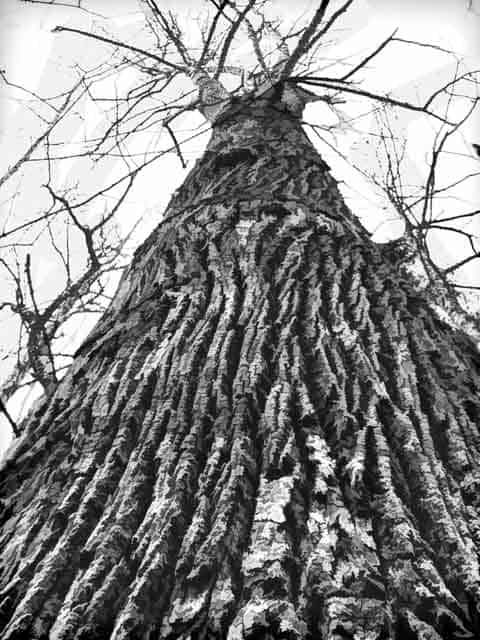 This is one of my hugging trees.

I confess that I often hopeÂ when touching or wrapping my arms around a favorite tree, up around the bend, out of sight of the road, back along the banks of Nameless Creek, that I will hear a numinous hum–like the Monolith from 2001: A Space Odyssey.

Wikipedia says this about those mysterious black polygonsÂ that were discovered first by early porto-humans in the movie:

“The first monolith appears in the beginning of the story, set in prehistoric times. It is discovered by a group of hominids, and somehow triggers a considerable shift in evolution, starting with the ability to use tools and weaponry.”

I expect we would experience a conceptual readjustment in ourÂ own evolution if we ever fully comprehended the life of a single tree like this wizened andÂ furrowed tulip poplar favorite. It was already a pretty good size when my grandmother was born near the first of the last century.

This tree is an animate subject, not an inanimate object, as fully living as you and me, if not animated or aware. It has a family tree–aÂ grandmother, too, growing from a whirlygig seed from a childÂ tree, and the poplar genealogy goes back and back in time in this deep valley.

WeÂ walk past them, through them, under them, taking their presence, their community as a given in this part of the world. We used them for our own good as tools and weaponry early on, then for two by fours and furniture, pencils and pallets. And shade.

But have you hugged your trees lately? When you do, listen carefully for the hum. There might be a considerable shift thereafter.