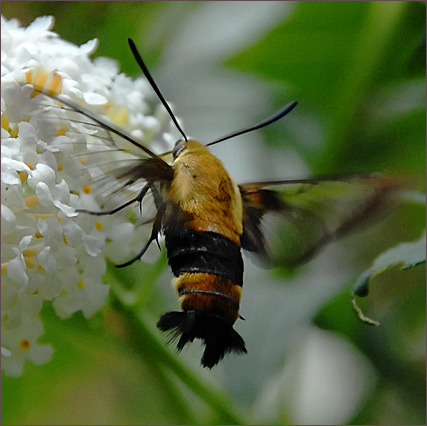 The windows were open all night and it is 75 degrees inside at 5 a.m. That doesn’t happen so often, and we’re expecting a break in the string of sultry nights this weekend.

Hot nights haven’t been so great for those who want their air conditioned to our exacting comfort requirements, but for the night creatures whose rate of metabolism is dependent on the temperatures the way nature gives them, these balmy dark hours have been fat city. The moths and other night pollinators are in their salad days.

Speaking of which: I had an idea the other day, and just now remembered it. (Ann will only be MORE certain I’m a whacko, so since she works this evening, this might be a good time to try this out.)

Take a white sheet (there’s part of the reason I’ll be glad she’s gone. Better to get forgiveness than permission. Eh?) and hang it on the clothes line out between the shed the the maple tree. Run an extension cord from the shed and plug in the work light hung over the clothesline and between folds of the sheet.

After dark, turn on the light. Wait for the insects. Photograph with flash.

This image of one of our busy clearwing moths was taken at the butterfly bush outside my window with the Nikon 18-200 lens, which is turning out to serve nicely as a mid-range macro.