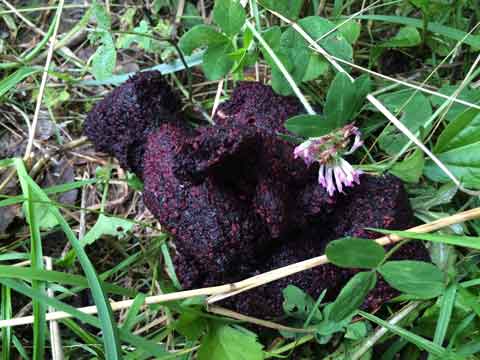 The dogs–yes, plural, we still have our grand-pup with us: the one you can enjoy and then send home to the parents (neighbors)–were disturbed most of the day yesterday by something over on the barn side of the road.

They never went far to challenge it, and returned to sit up high on the driveway to keep watch, cautious and uneasy.

On our final loop of the day along the pasture path, we came across (almost stepped in) a sign of the source of their disturbance.

This bear scat probably weighed three pounds. It’s hard to get a sense of scale in this late-afternoon image. But you can tell that itÂ Â  consists almost entirely of black raspberry seeds.Â  The blackberries are just now coming in.

So as I said yesterday, it has been a bountiful year. And it is not just the jam and jelly makers that are filling their bellies with berries.

And I ask you, fickle blog butterflies: where else you gonna go in the blogosphere to find pictures of poop? Come on back later this week and I’ll show you new base-levels of down-to-earth blog bio-topics–and then I’ll try to find something pretty for later in the week so I don’t run off yet another wave of visitors.