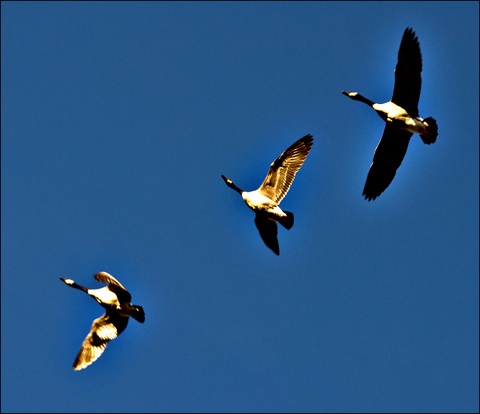 I pass a lovely pond on a dairy farm between home and work that this time of year is thick with Canada Geese–more likely than not, following along behind the cattle to pick seeds out of the hay strewn out in long rows on the frozen ground.

In Rapid City last week, on our one pleasant day there, we went to nearby Canyon Lake Park. It was similarly swarming with Canadas that apparently wander far from the margins of the lake and into the play areas around swings and slides and such. I grabbed this shot from near the monkeybars.

Apparently I say because they had left their thick green calling cards liberally about as they foraged for another bite. We unavoidably carried samples of goose poop home in the treads of our shoes and couldn’t fix the problem even with lots of stomping in the patches of snow that persisted out front of my daughter’s house.

Ann resorted to using a stick. I just took my shoes off and left them at the door. But I wondered about the potential health effects of so many geese coexisting where so many people–and especially children–also live.

I know urban friends in Birmingham who keep slingshots and marbles at hand. The Canadas around the golf courses and yards are considered vermin–rats with wings. I imagine a healthy goose dumpling on a golf green would play heck with your putting game.

And despite their name, they’ve decided in recent decades that Canada is just too far to go and so they populate the manicured lawns and suburban pastures year ’round.

Do Canada Geese (a protected species) pose a public health risk? Can a land owner shoot and eat them? Should they be eradicated from public places in the most human manner possible?

Here’s a Human Society spin on those issues. Others are less tolerant.

2 thoughts on “What’s Good for the Goose”