Where to Find Morels

fred Posted on May 7, 2013 Posted in nature, PhotoImage 1 Comment 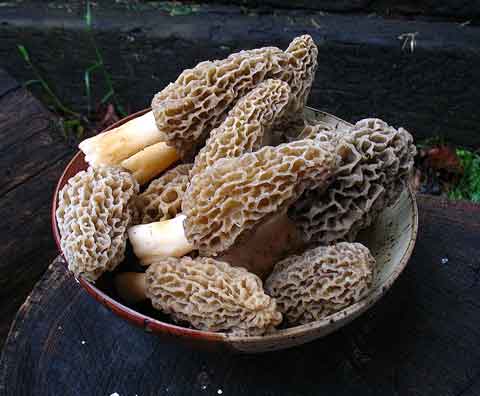 Answer: where ever they come up out of the soil.

We’ve had this notion since we first discovered our “morel patch” early after moving here in 1999, that this was THE place to go to find these delicious if elusive fungi.

We usually find them a day or two either side of April 25. So we thought we’d missed them entirely–maybe during our week in Missouri–and so were astonished to find a couple of large ones, not only later but NOT in the designated and accustomed patch.

And so this is a good thing, because our eyes are much busier now, even along the “new road” and even the old logging trail up behind the wood pile where I found a large one yesterday a literal stone’s throw from the back door.

So despite all the back-country lore about finding morels in old apple orchards, burned over forest, under elms and poplars etc etc, we’ll just expect them wherever we are surprised by them.

And I always keep in mind that the very largest morel I ever collected was under the downspout at our house on Withers Road in the middle of Wytheville (VA). So I think downspouts needs to be added to the field guides as a place to look. And that’s the morel of that story.