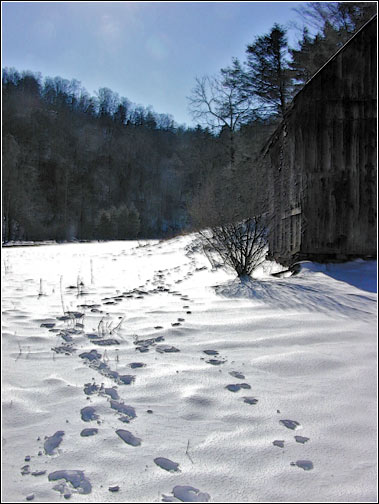 If the TV Weather Persons are right about the coming winter–and the Wooly Bears are wrong–I predict that it will be cold and wet as you open the paper and read this column. Or not. From either meteorological source, your mileage may vary.

It IS the weather after all. But it seems that for the winter of 2008-9, for what it’s worth, the consensus of opinion is that it will be “colder and wetter” than usual for much of the eastern US.

The first predictions that Floyd County was in for a doozy of a winter came in response to the productive and abundant summer we just had. I’d never heard that one before, but it makes sense.

“Oh yeah” said one local old-timer, “if we have a bumper crop of walnuts, the gardens are full of produce and apple trees hanging heavy, why, that’s nature’s way of providing for the wild creatures in the hard winter we’ll be having.” (Paradoxically, there are NO acorns over much of Virginia this year.)

That prospect seems thoughtfully efficient on the part of natural providence, merciful at the hand of a caring god whose eye is on the sparrow (if not the squirrels of ‘08) and poetic to the romantics among us. But is it accurate and should lay up more of those potatoes, apples and beans than we would ordinariy keep in the root cellar to see us through the hard, cold and snowy months to come?

Of course we would not be good rural mountain folk if we did not consider in our prognostication what the wooly bear caterpillars tell us is coming our way. I could never keep straight their supposed black versus brown message.

Consequently, my Rule of the Wooly Bear has always been that, when I see them in great urgency crossing the roads seeking shelter in October (and to my wife’s horror swerve to miss them), no matter what the mix of brown to black, it will be more or less cold sooner or later and I’ll need a furry coat like theirs to keep me warm.

Since ignorance is bliss, I’ll pretend not to read the evidence that, if there is a shift at all in fur color of a year’s population of Wooly Worms, they get it right about half the time. Weather prophet? Not exactly. Toss a quarter, you call it. So where can we turn for winter wisdom? A hundred years ago, how’d a farmer figure how much hay he’d need for the winter ahead?

To predict tomorrow’s weather, look at today’s. The Amish say, “August fog blooms winter’s snow.” Wow. That means folks over on Walnut Knob along the Parkway are in for it, while we here on Goose Creek, not so much.

Another measure of winter to come is said to be the frequency with which yellow jackets build nests in the ground. Yikes. Keep a VDOT snow plow at the top of Shawsville Pike because we’re going to get buried down here this winter!

Joe Bastardi, chief long-range forecaster for AccuWeather, is calling for one of the coldest, snowiest winters in years in the East (that’s just barely north of us) that will be one to tell your grandchildren about. Following an active hurricane summer and with currently cooler South Pacific and Gulf waters, some places will surely see a colder, wetter winter this year. Or not.

In the end, we will augur the future months’ weather from all the signs at our disposal and take our chances. Whimsy or wisdom, brain or heart? Wet finger in the wind or the home anemometer dial on your desk? Your guess is as good as any.

We’ll hope for the best and prepare for the worst. Hunker down, neighbors. Keep the snow shovel handy just in case.Â  Have plenty of cocoa on hand, bring in an extra cat and toss another log on the fire.

Because three black crows called on a cloudless day from the roof of the barn in October, I predict a more or less pleasant third month of the year by and by if we can just hang on through the hard–or not-so-hard–winter of ‘08.