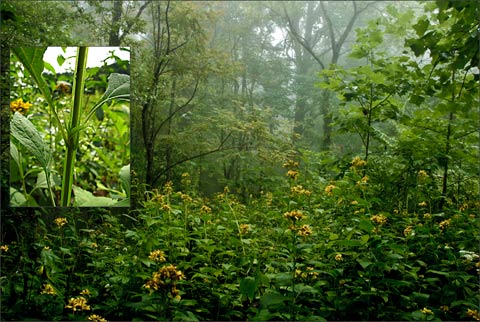 It is easier to believe we are well into autumn looking out at first light at the leaf-strewn world. The five maples that are our summer conditioners of air now begin the courtesy of letting weaker, lower-in-the-sky light and warmth into our windows.

And so, the leaf-peepers–those many who find it worth $4 gas–will begin to haunt the Parkway and the high places to observe the Grand Turning. Who knows what this summer’s alternating wetness and drought and overall cooler-than-usual conditions will do to fall colors.

All the best guesses are about as reliable as the woolyworm at predicting the vagaries of atmospheres.

That being as it may, should you travel the Blue Ridge Parkway in the coming weeks, you’ll surely see the head-tall yellow flowers of Wingstem. (There will also be for a few more weeks the various goldenrods, orange touch-me-nots and white bonesets among others.)

Wingstem grows in profusion along the New River Trail near Radford University. Knowing that not one of my field tripping students knew it by name (poison ivy was actually recognized by ONE student and that was the limit of their nature lore) I asked them to look carefully at the plant and give it a common name.

See the inset. (Click image to enlarge) You cannot observe this feature driving along at parkway speeds. You’ll have to get out and have plant in hand to see the “decurrent leaf tissue” that runs four ribbons of green down the entire stem.

“What common name would you give this plant?” I’d ask. “Does the name wingstem make sense?”

And hopefully thereafter, hearing a plant called “Touch Me Not” would make them stop and think that there was some feature of the plant that warranted the description.

You can play that game with your kids. WE just discovered this plant. What can we call it? (Based on shape, texture, smell, features like milky sap, color of flowers…)