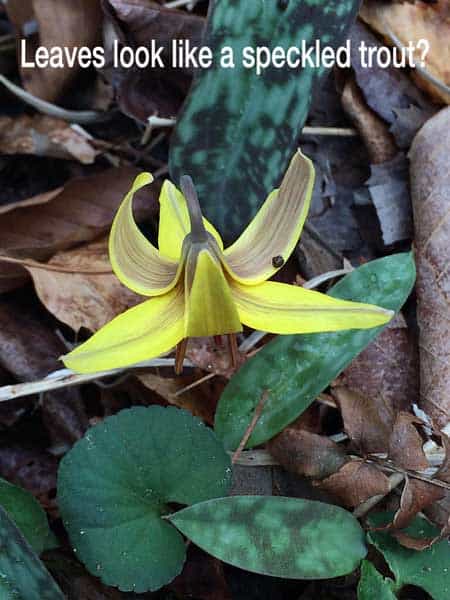 …Trout Lily. And there are other common names as well for this familiar if short-lived flower of spring we find along Nameless Creek.

It blooms about the time trout season opens; its leaves have a speckled pattern like native trout (if there were any of those left in Nameless or Goose Creek.) So those facts might have contributed to the common name.

It does have edible tubers–if you’re willing to dig way way deep in the black and often rocky soil where they grow–often besides trout streams–like Goose Creek used to be before the deep scour holes filled with silt from roads, fields and construction sites upstream.

This is tough plant to get a good image of. It grows very close to the ground, is often facing same, and has enough depth that something is always going to be out of focus unless you have a good macro lens and maybe a small tripod.

Also, only the plants that have been around long enough to acquire two leaves will produce a flower. One-leaved (far more common) are only vegetative for a year or more.