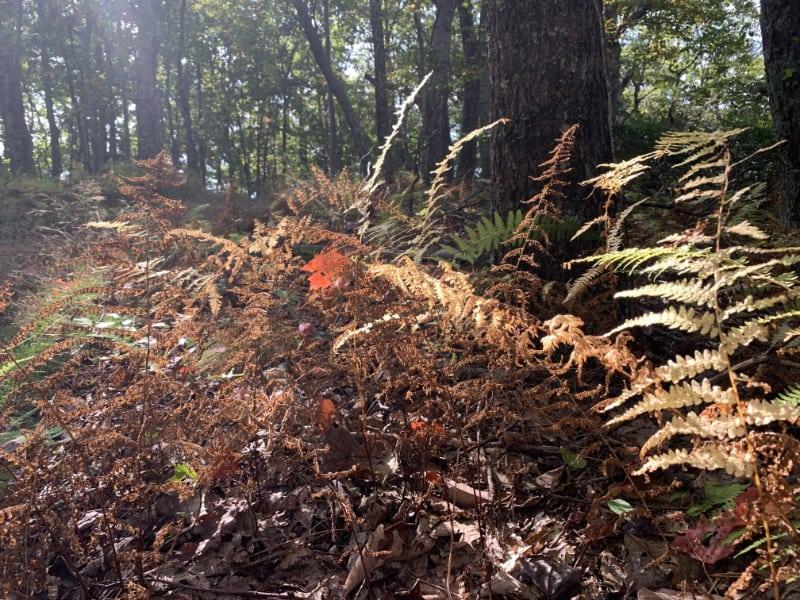 This is perhaps the most memorable quote of the summer–so far.

Overheard from the back seat on the 800 mile trip from home to Goose Creek, the four year old offers this bit of wisdom to no one in particular. Â And later, she performs for no apparent reason in the kitchen, Â bouncing between the kitchen counters and the fridge.

What a puny stage for a beautiful buddingÂ ballerina!

And I’ve already shared about the brief visit of the grands during the short break between the last day of school and the first day of vacation. One warm day, the 8 yr old lost a battle with a strawberry ice cream cone at the Country Store. Quite the spectacle!

And no that’s not a spider on her cheek. I think it was a palm tree from the last day of school just oneÂ day before the ice cream attack. 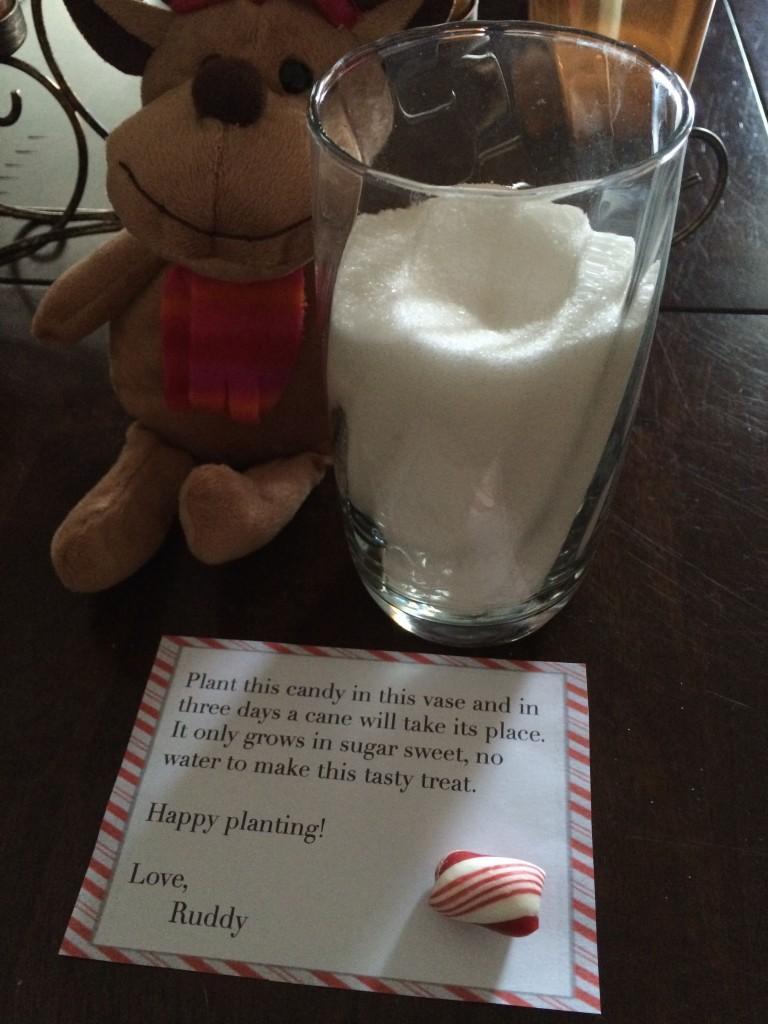 I think his territory might be limited to just this stretch of Carolina coast, but here, the good elf Ruddy, has been very busy getting the younger children primed for Christmas by laying out surprises overnight for the joy of discovery each morning.

Several days ago, he left a candy cane bud as you see here. When planted in a jar of sugar, he said would grow into a candy cane in three days (don’t add water.)

I admit, I was skeptical and said as much to the munchkin. She assured me that if Ruddy said it would happen, I had better just wait before I expressed such old-person doubt. Her older sister, Abby, assured me that Ruddy’s track record was beyond reproach.

And this morning, she made a believer out of me. Just look! 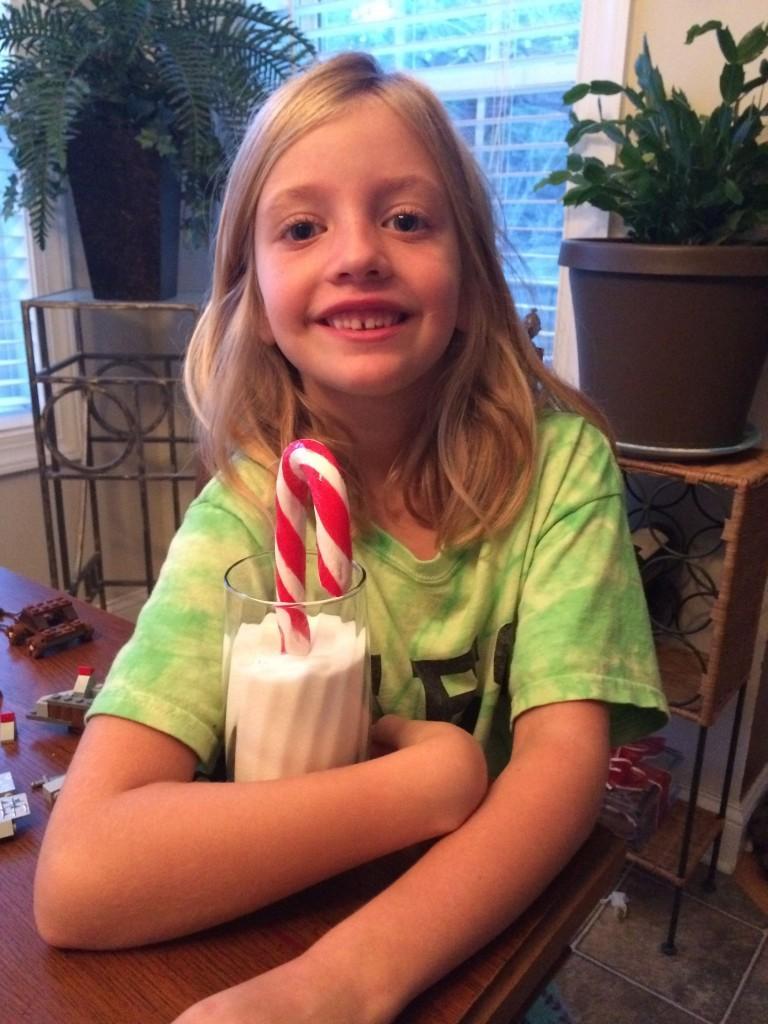 Yes, we have two grand daughters, and it is only because the older one had a NIGHT game that she has not been featured in this back to back g-dau series.

The take-home from watching the energy expended on the field was that “there was a time” and it does not seem so long ago, when energy and strength were boundless and pain a stranger. To everything there is a season I suppose–a time to run and a time to refrain from running.

I remember when our son first “played soccer” (or at least there was Â a ball by that name on the field.) The sport amounted to watching a tightÂ little wad of appendagesÂ attached toÂ every 6 yr old on both teams, all within five feet of whereever the ball was–a shin-kicking dust cloud of a sport.

Occasionally the ball entered the goal by accident and parents for the offenseÂ all claimed their child was responsible. Who could tell through the dust storm?

So I was pleasantly surprised to see in the game we watched on the tiny tot sized rectangleÂ some actual attempts to pass the ball and hold some semblance of assigned position on the field. Not entirely, mind you; and there were a few on both sides who could be tagged as saying inÂ future years that they wereÂ “not that athletic” growing up.

The shot up topÂ was not my favorite, but with the format of “featured images” in this WordPress template, you’re pretty well stuck with landscape-oriented pictures to frameÂ a composition to accompanyÂ the post.

So I’ve just tucked the other one in as a thumbnail of a better framed action shot and you can click or hover over it and see the larger image.

Honestly, it has been too long since I’ve had the Nikon D200 out of the bag, and it felt so good to have a responsive shutter and a manually controlled exposure/shutter speed option and manually-zoomable lens. You DO give up a good bit with the iPhone.

But the best camera to use is the one you have with you. My “phone” is ever with me, so has become the “best camera.” But I have apologized to my Nikon about my neglect and will make it up to her in the next few months. Promise.

[su_dropcap]W[/su_dropcap]atching our grand daughter frolic in the sprinkler, I remembered the utter joy the first day we were allowed to go barefoot–in the zoysia grass, under the mimosas, only to get “stung on a bee” as one of us lamented when it happened.

The moving-parts oscillating gizmos came along well after the first one I remember–a ring of brass with holes in it that just sat there and put out a tiaraof luke-warm Alabama water a few feet into the sultry air.

Joy is found in free and simple things when you’re six. We should all be six as often as possible.