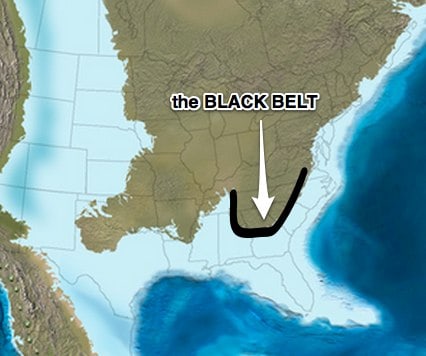 …Or the Socioeconomics of the Selma Chalk

Indulge me. It’s Friday. I’ll be brief, hobbled by fiberglass as I am (until the thumb is freed finally next week.)Â I will let Robert Krulwich explain.

You know I have been recently interested in understanding the terrain that we saw on our trip home from southeastern Missouri, passing through the north western tip of Tennessee. It looked remarkably like south-central Alabama, with its cotton and soybeans and peanuts by the hundreds and thousands of acres. There’s a reason for the similarity of appearance: this is all a geological future known as the “black belt.”

I have also recently been curious about the relationship between the soil under our feet and its relationship to our identity and culture. This is a perfect example of that historical relationship. It is often true that we are who we are because of where we are.

The black belt is a 300+ mile strip of black soil laid down over top limestone known as Selma chalk–the deposit of the calcareous exoskeletons of millions of years of phytoplankton life death and sediment. I became aware of it for the first time on a field trip in a plant ecology class at Auburn University. I was thereafter aware it every time we drove from Auburn of Birmingham down to my wife’s family place on the coast of Mississippi. It is very distinctive, typified by open “prairies” and isolated clusters of trees, many festooned with Spanish moss.

Turns out, that strip of ancient coastal plain became the most fertile soil for production of cotton 200 years ago, and consequently, the zone where most of the slaves were employed in the deep South. Many of them remained after emancipation. Most of them vote Democratic.

It is no accident that it was from the black belt that the civil rights movement took its greatest strength in places like Selma, Alabama. And in the end, the blue strip anomaly in a red swath of counties in the deep South in recent elections portrays the geopolitics of plankton.

1 thought on “A Black Belt in Southern Politics”