↓ Skip to Main Content
Home › culture › Is There Anyone Home?

Is There Anyone Home? 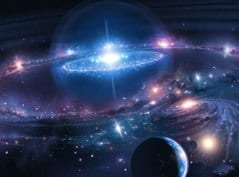 The argument, by chance alone, and reinforced by the unblinking faith of Carl Sagan, holds that among billions and billions of stars, there has to be more quasi-intelligent star-stuff in the cosmos than what resides inside the human cranium. To which I offer a resounding: maybe. Maybe not.

But IF, after decades, then centuries and millennia of letters in a bottle sent off into space to propagate our fervent hope that we are not alone, someone answers. What would our first communication say to them?

This is being given heavy consideration in high places, just in case. Witness, the “Dear Aliens” project guided by Lucy Hawking, daughter of physicist Stephen Hawking. As writer in residence at Arizona State, she’s soliciting “first words” from residents of Maricopa County, a greeting of first contact with ET.

“We’re going through puberty on the scale of a planet, so we hope you aren’t too startled by the messy nature of things here. How long did it take you, as a species, to grow up?

What would you say? Here’s mine:

“If you’ve been watching how we treat each other and our planet, you’ll understand why we think it wise to keep your distance. If there’s any way to do it, we’ll come take what you have and put you to work in our machinery of commerce and war. Nice to have had this chat.”

Of course, if an intelligent civilization was out there, it may have sent it’s message millions or billions of years ago and we’d just be getting it now if it traveled our direction at the speed of light. Then our reply would take an equal amount of time to get back to them.

So. This whole “what would we say” idea as a conversation only makes sense if their ship is hovering at the time, casting a giant shadow over the Mall in DC. And we know how that conversation turned out.

5 Comments on “Is There Anyone Home?”