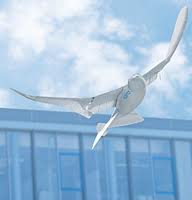 Nope. It’s a robot seagull. This is truly amazing. What a powerful driver of technology warfare has been. How can we even consider a peaceful world that would deprive us of robot spy-birds, laser pointers and kevlar!

BTW, don’t be surprised by a shift to micro-post for the month of April. I won’t disappear. But I will likely take the vow of silence, mostly, until my typing mojo returns.