↓ Skip to Main Content
Home › culture › Message in a Bottle: The Power of Words

Message in a Bottle: The Power of Words 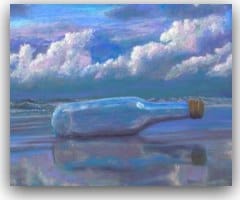 Some mornings I wake up discouraged. I think maybe I would be better off to go and play Mindsweeper (or another game, if I had a single one on the computer) than to try to “say something” on the blog. Lord knows, it’s been almost ten years. What has it been about? Where have all those words carried me? What difference to anything have they made?

I look back through my scraps of pocket paper, my recent photographs, and the morning news to find something to think deeply about, and see what I say about it. I create my “morning pages” in miniature and yet another more-often-than-not disregarded message in a bottle is cast off into unknown. Sometimes, against the odds, it’s found by a passing stranger or an invisible friend. Mostly, those messages, from the silly to the profound, are still drifting out there looking for a beach.

Ten years ago, during a time of inner turmoil, knowing my days were numbered working for The Man, I turned to writing. I can’t say why except I have always loved the power of language to move me. Long before the blog, I told myself stories in the shower. I discovered alliteration, puns, and poignant metaphors while driving to work. None of those words ever escaped. With the blog, thousands of words now float, and hundreds of thousands have sunk invisible below the surface.

Since writing found me a decade ago, I can’t just stop it. Some mornings, I think I should–at least in this public, mostly-superficial, unfocused, broad-brush fashion, writing across the range of whatever comes to mind, literally, from chickens to cosmology. It’s apparent to the few readers regular enough to see it–that I write for myself and for those imagined future kindred spirits and genetic offspring who might wonder what we were thinking about life, the universe and everything back those ancient times.

And at times, I confess, I’d hope to change hearts and minds. Mine needs changing, and maybe that’s the greatest good the writing does. It firms up my convictions, my understanding of a vast variety of topics I’ve delved into over in ten years. Writing slows me down and makes me follow my assumptions about life all the way to some kind of conclusion. And if I can write clearly about it then I probably almost understand that little piece of it.

I especially think I should stop writing about ignorance, injustice, bigotry of all sorts, corporate greed, national hubris and imperial politics of our times. There’s not much choir left around the blog to preach to.

Then I read something like this paragraph (I cut it up into shorter chunks) that I found in Orion this morning by Derrick Jensen. His “Loaded Words” prompted this post I had not intended to write. I know I lose readers when my topics veer away from local-earthy tree hugging. But it’s hard to blog while Rome burns:

Follow the truth–follow the words and ideas–wherever they lead. Words matter, they said. Art matters. Literature matters. Words and art and literature can change lives, and can change history.

But you can help to create a literature of morality and resistance, as each new generation must create this literature, with the help of all those generations who came before, holding their hands for support, just as those who come after will need to hold yours.

14 Comments on “Message in a Bottle: The Power of Words”