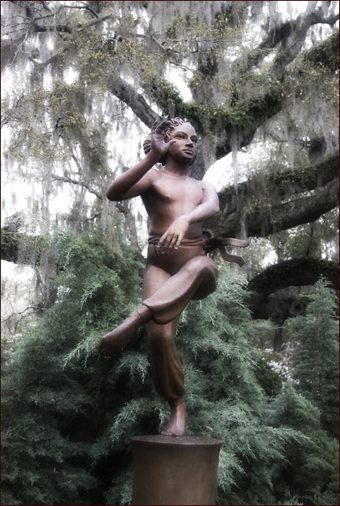 Frankly, I was not surprised having heard of the human swarm that the Myrtle Beach are has become. Still, seeing it for ourselves about a month ago was a shock. The beauty and serenity of Brookgreen Gardens and the many impressive sculptures (this one so nicely reflecting the lines of the massive arms of the live oak in the background) seem sadly out of place, a small island of natural beauty and peace in a sea of manmade change.

A friend with a foot in both camps (Floyd and the Grand Strand) echoes the concern of many that his coastal home is being loved to death. And he shares this piece from the local paper with an eye as well to what might happen to other lovely places we call home.

Unfortunately, unchecked local growth is threatening all of this. And the problem is widespread: Coastal areas of the United States make up about 17 percent of the country’s land area, but hold about 53 percent of the total population. The Southeast, which in 2003 was the least populated coastal region in the United States, is growing the fastest. At the current growth rate, Horry County’s 250,000 will double to 500,000 by about 2020, and to 1 million by 2032. Given the haphazard way we’ve grown so far, I don’t want to live in the Grand Strand when the permanent population surpasses 1 million people.