↓ Skip to Main Content
Home › Activism › What in Heaven’s Name?

What in Heaven’s Name? 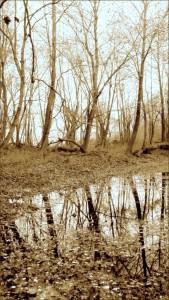 You’ve looked over my shoulder in the past week or so as I’ve mused about the “History of Green” and wondered if Climate Chaos is a moral issue.

In all this, you may share my dismay at the roaring silence of the churches, especially the southern protestant churches, as if there was nothing within their creeds or scriptures or practice of charity to address “green” issues.

There have always been exceptions to this broad-brush dismissal of The Church as complicit by its lack of discourse around the issues of climate chaos, plant and animal extinction, and the impact of globalization on the world’s poor. But one has had to look hard to find the silver lining around the dark cloud of Christian indifference.

I’m encouraged to think this is changing rather rapidly.

I mentioned an SEJ session that asked “What would Jesus do about CO2?” Thankfully, someone in the audience was more than a spectator, and took notes. Read “Experts Debate Moral, Religious Case for Climate Action” over at Climate Central.

Attorney-activist Dawn Coppock (LEAF) spoke openly of their faith as it impacted actions to oppose mountaintop removal, an Appalachian travesty of man against man, as just one of many symptoms of humanity’s failure in the responsibility of stewardship. Too many denominations have terribly twisted the Bible’s “dominion” of humankind in its relationship to nature to mean leave no survivors.

If you are looking for another perspective of the Christian world view of nature-and-man, I have some sources for you.

While it’s sort of “baptist”, Our Father’s World is, on the whole, an encouraging 26 minute video (suitable for Sunday School classes or small group discussions) and I encourage you to watch.

And many thanks to LEAF (Lindquist Environmental Appalachian Fellowship) for providing copies at the SEJ session of the book, Green Like God, by Jonathan Merritt. My wife started reading it and gave it away before I could dig in, but she was impressed with sound theology that made the valid connections between the gospel and the ground, you might say. We’ve ordered more copies.

In a half century now as observer of mankind’s unkind relationship to the natural world, it is in a change of heart that I see hope. A change of administration, of technologies, of armies or one driven by our (lower-case f) father’s craven consumer economy sung in a different key–none of this will buy us much improvement if we don’t love our neighbors as ourselves.