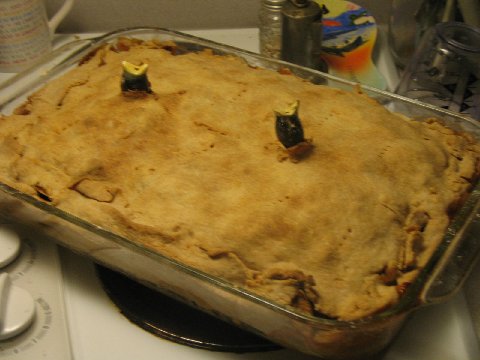 A family member sent a picture this morning of an apple pie with two “pie birds” embedded in the upper crust. (I learned they are also called “crustholders” because another function other than venting steam from the pie is that they support the crust so that it won’t sag in the middle.) Hmmm, I wondered. Did the nursery rhyme (four and twenty blackbirds…) come first, or the pie birds, and later the odd nursery rhyme? Or was there any relationship between the two birds at all?

Dang if the tale behind the “Song of Sixpence” isn’t much more convoluted than I would have guessed. It turns out, it is a veiled message to the pirate Blackbeard’s potential recruits. And somehow, it has become entrenched among our nursery rhymes.

Sixpence: the pay. Pocket full of rye, the (drinkable) perqs. The four and twenty blackbirds: two dozen storming pirates dressed in black who overtook the easy prey (the pie) and set it before their leader, Blackbeard, the “king”.

AND…it turns out, I’m not the first person to wonder about this connection between rhyme and dessert. Wikipedia has it thusly:

The nursery rhyme Sing a Song of Sixpence refers to “Four and twenty blackbirds, baked in a pie; when the pie was opened, the birds began to sing” but it is uncertain whether pie vents were designed to look as birds because of this song, or whether pie vents in fact existed earlier and the song was a reference to them.

Wait! There might be another explanation.Â  But really: dwarfs?

“Animated pies or pyes were the mostÂ  popular banquet entertainment. The nursery rhyme “Sing a Song of Sixpence . . . four and twenty blackbirds baked in a pie,” refers to such a pie. According to the rhyme, “When the pie was opened, the birds began to sing. Wasn’t that a dainty dish to set before the King.”

In all likelihood, those birds not only sang, but flew briskly out at the assembled guests. Rabbits, frogs, turtles, other small animals, and even small people (dwarfs) were also set into pies, either alone or with birds, to be released when the crust was cut. The dwarf would emerge and walk down the length of the table, reciting poetry, sketching the guests, or doing tricks.”

5 thoughts on “When the Pie Was Opened…”