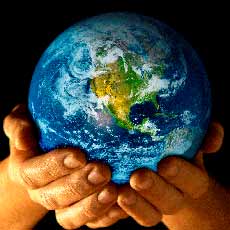 I am all over the map these days–geographically, with far more airport time than I prefer–and scattered, too, in my poor abilities to draw a bead on a target for my time and energy.

There are so many global-issue writing targets worth aiming at. I feel the confusion of a hunter confronted not with too few quail but way too many so that singling out an individual in his sights is impossible. The bad news is traveling in dense flocks these days.

I am all over the map emotionally as well, vacillating between deep discouragement and a less frequent and very modest hope we yet have time to turn things around. I frankly don’t know if I should yield to brutal honesty in confronting the possibility that nothing I do, that we do, will make enough difference in the end.

At the same time, from the other side of my mind, I am certain that it is my highest duty to be–or to strive to be–part of the mobilized masses that can take aim at first one, then another, of the swirling eco-wraiths before us. Killing just one of the host of them–will not be enough.Â  And squelching even one (like global CO2 reduction) will take far more and different munitions than humanity has so far managed to fire off. We have failed to breech the political and corporate fortress walls.

The ways in which we’ve taken to the hunt have not worked. The political process has failed. The present administration has failed no less than the prior regime of disastrous indifference to the state of the planet in high places.

Bill McKibben, among others, is ramping up more than the rhetoric.

His most current expression of his lost hope in our political process is found inÂ  his piece entitled “We’re Hot as Hell and We’re Not Going to Take It Any More: Three Steps to Establish a Politics of Global Warming.” It concludes with these words:

We may need to get arrested. We definitely need art, and music, and disciplined, nonviolent, but very real anger.

Mostly, we need to tell the truth, resolutely and constantly. Fossil fuel is wrecking the one earth we’ve got. It’s not going to go away because we ask politely. If we want a world that works, we’re going to have to raise our voices.

And I wonder for myself–what now? Am I doing all I could? What is the best use of my small arms against the Beast that confronts us? Can David take on Goliath and win? Can we afford not to go to battle in earnest and in great numbers? What becomes of us if the McKibbens of this world finally give up? Have you given up?

8 thoughts on “Are You Fiddling While Rome Burns?”