Doubt-mongering: Undead in Our Times 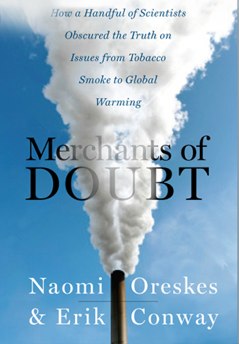 I’ll just give you home work this morning. Read all of the quote below from the book, Merchants of Doubt, by Naomi Oreskes.

Watch the video of her presentation. (> 1 hr) Buy the book for yourself for Christmas, then loan it out widely among your doubt-ridden friends: it’s not entirely their fault. They’ve been intentionally infected.

Oreskes reads a passage from her book, including the following (starting at 38:10 in the video):

“Imagine a gigantic, colossal banquet. Hundreds of millions of people come to eat. They eat and drink to their hearts’ content, eating food that is better and more abundant than at the finest tables in ancient Athens, or Rome or even in the palaces of midieval Europe. Then one day a man arrives wearing a white dinner jacket.”

It is, Oreskes explains, the waiter — and he is holding the bill. She continues:

“Not surprisingly the diners are in shock. Some begin to deny that this is their bill. Others deny that there even is a bill. Still others deny that they partook of the meal. One diner suggests the man is not really a waiter, but is only trying to get attention for himself or to raise money for his own projects. Finally the group concludes that if they simply ignore the waiter, he will go away.

This is where we stand today on the question of global warming. For the past 150 years, industrial civilization has been dining on the energy stored in fossil fuels and the bill has now come due. Yet we have sat around the dinner table denying that it is our bill, and doubting the credibility of the man who delivered it.

The great economist John Maynard Keynes famously summarized all of economic theory in a single phrase: “there is no such thing as a free lunch.” And he was right. We have experienced prosperity unmatched in human history. We have feasted to our hearts’ content. But the lunch was not free.

So it is not surprising that many of us are in denial. After all we didn’t know that it was a banquet — and we didn’t know that there would be a bill. But now we do know. The bill includes acid rain, and the ozone hole and the damaged produced by DDT. These are the environmental costs of living the way citizens of wealthy developed nations have lived since the industrial revolution. Now we either have to pay the price, change the way we do business, or both.

No wonder the merchants of doubt have been successful. They’ve permitted us to think we could ignore the waiter, while we haggled about the bill. The failure of the United States to act on global warming as well as the long delays between when the science was settled and when we acted on tobacco, acid rain and the ozone hole are prima facie empirical evidence that doubt-mongering works.”