Earth Day: We Couldnâ€™t Stay Here Without You

None of the students I spoke to recently could tell me the year of the first Earth Day. After all, some of their parents weren’t even born yet. Those young people had no historical context of the event, had no sense of what lead up to that important day.

And yet, it was largely the energy and passion and concern of people their age 44 years ago that propelled Earth Day into a global event now celebrated every year in more than 100 countries.

The roots of passion and zeal that lead to that first April 22 event were many. Rivers were catching on fire from the volume of volatileÂ chemicals dumped into them; downtown buildings were invisible in the ozone and nitrous haze that made American citiesÂ look like today’s China; and birds were dying in large numbers because–as Rachel Carson sounded the alarm–we were very wrong about the long-term effects of man-made chemicals in the air, soil and water.

And that was not okay. We became convinced that our presence here was making the planet sick. It was time to change our ways, and we did so with a level of commitment and focus that really made a difference.

Forty-four years from now, those students I shared my story withÂ will be my age. What will their Earth be like? Will their generation take the reins or let business as usual take its course? Did they even know the deeper issues behind the obvious failures like Love Canal, Deep Water Horizon or ocean dead zones?

The level of awareness was mixed in that class of freshmen to seniors and hard to judge from the front of the classroom. Mostly, I’d say they are “younger” than their age peers from 1970. They may have the facts but they aren’t looking ahead and the costs their choices today will make in the lives and environments of their kids and grandkids.

Flower power. Tree huggers. Back to the land.

Those clichÃ©d phrases of those days seem silly or trite or eccentric because they’ve been played that way by the media for the most part. They were the stoner generation, a bunch of idealistic hippies who fried their brains on drugs and needed toÂ just get a job. 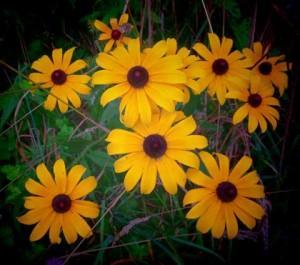 I will have to confess in 1970–the year I started grad school as a zoology major– I didn’t get it. I had not beenÂ not an activist. I was generally oblivious to environmental issues until that year. But todayÂ I look back and have great respect for the values at the root of these trivialized phrases that describe the vision of the Earth Day generation.

Those “movements” expressed a kind of generational repentance to repair broken relationships to nature, the planet and each other. We had not honored the Earth as the material source of life and our well-being but treated it in ways that were making it sick. We had lost the sense of wonder and reverenceÂ for the life we share with all things. The youth of that timeÂ had become part of the machinery that was eating us up, and they rejected the future where that would lead them.

Many in that generation did more than wear flowers in their hair. They came back to the land and turned away fromÂ the systemic evils of the consumer economy that treated trees and people as commodities.

It was a genuine, future-changing phenomenon, and Floyd County is different today because of the tide of change represented by that first Earth Day.

The influx of young people in the 70s into Floyd consisted of people–potters, farmers, painters, herbalists and poets– who wanted to use their hands in a place not sold out to or uglified by fast-lane busyness–a place where the greatest goods were not profit and efficiency; a place where they could practice their farming, their arts or crafts and have the worth of their lives measured by their relationship with the soil, the mountains, the people around them.

A telling fact: until just a few years ago, of the 105 counties in the Commonwealth of Virginia, Floyd County was 102–three from the bottom–in per capital income.

And while it has not been measured, I would be willing to bet that, if you could measure the general sense of well-being, our county would have the highest “well-being index” of any in Virginia–a state of mind and relationship with place brought about to no small degree by those Earth Day pioneers.

And so there are lessons learned from Earth Day in the decade after that event that have been forgotten, obscured by the engines of empire, commerce and wealth-generation. They can and they must be re-learned.

It is today’s young people who must hug trees, wear metaphorical flowers in their hair, honor the Earth and come “back to the land” in their attitudes, their lifestyles and their politics.

Failing that, there may not be a high level of perceived well-being in their grandchildren’s generation.

3 Comments on “Earth Day: We Couldnâ€™t Stay Here Without You”