Power of WE: To Become Fully Humane 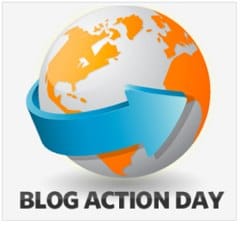 The Blog Action Day theme this year is “the power of we.” That power is extended many-fold if the definition of WE is expanded to include all of the creatures on the planet whose well-being must be sustained if humanity is to effectively and justly serve the stewardship role that only our species is capable of.Â

The overwhelming consensus of human thought through history has agreed that it is “inhumane” to torture, to abandon, or to exploit our dogs or cats or other domestic creatures, even if those animals are considered “private property” as Michael Vick’s dogs would have been.

Centuries ago we were only aware of animals in our immediate environment, having no conception then of the larger global plant and animal “webs” of ecological relationship we now learn about in grade school biology — relationships that depict food networks, nutrient cycling, ecosystems and biomes, all with their complex communities of plant and animal species interacting together to perpetuate sustainable life processes for and with each other.

We know now that even the smallest creatures — earthworm or honeybee — play an essential role in human agriculture and in the greater human economy. The world is far more complex and interdependent as living things interact with one another in complex ways that we could not have understood until recently.

We now know that humanity’s health depends on the well-being and on the resilience of creatures that exist outside our local knowledge of pets or domestic beasts. This understanding, only available in the last blank of history, should greatly expand the scope of what we consider right or wrong with regard to our treatment of both living things and of the ecosystems of water, earth, and sky that sustain them.

In a world soon moving past 7 billion of our own species, we can’t trudge ahead like so many isolated islands of personal entitlement, as if only human rights merit attention. To arrive at a sustainable future, we must quickly move away from me-here-now to a new emphasis on them-then-there. The reach of our ethical and humane care must extend to include all species of living things and all human populations on the planet, with consideration of our ecological footprint today looking forward seven generations into the future.

We face decline and collapse as possibilities within our grandchildren’s lifetime. Humankind has never had such an overwhelming weight of evidence that calls for us to act on the fact that the health of all living things and life-systems is crucial to our long-term well-being. The biosphere is afflicted with a multi-front perfect-storm crisis, largely because we’ve been indifferent to more than a century of animal abuse, if you will.

We’ve neglected the care and feeding of creatures that are under our care. We’ve been indifferent to inhospitable conditions, that by our wars on nature and each other, we’ve created for the plants and animals of rain forests, deserts, oceans and prairies. We watch species simply wither and disappear from earth in the most extensive, ongoing extinction ever caused by the actions of a single organism: us. We’ve not shown prudent stewardship over the fields with which we’ve been entrusted.

We must come to regard the wider reach of nature as worthy of the same protections we have granted the animals we know and love and, in our short past, included in our too-narrow sphere of ethical treatment. If we can make this change in our understanding of what is right and just, we will no longer look the other way.

We will condemn and not reward those responsible when mountaintops or rain forests, oceans, agricultural soils, tundra or prairie are mistreated. We will abhor injuries to our fragile and voiceless world. We will express our disgust over those abuses in the same way we do when another’s pets or working animals suffer because they have been treated with cruelty or neglect. We will become a truly humane society, and stand in harm’s way, for the sake of beasts and biomes; and we will do so for the sake of our own future.

3 Comments on “Power of WE: To Become Fully Humane”