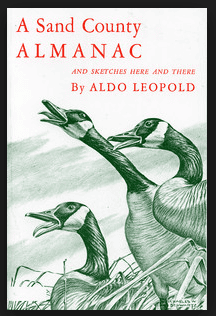 Aldo Leopold died helping fight a fire on a neighbor’s property not two weeks after I was born. I stood in the doorway of his cabin in Wisconsin a few years back, and tried to imagine his last good days in those reclaimed waste-woodlands he loved so deeply.

I’m always surprised how few people are familiar with Leopold, while he has been a personal “hero” of mine. His compiled essays were published in a book, Sand County Almanac, the year after he died.

I remember the day in 1970 when I read in the early pages of that book about the time, as a young man, when Leopold had shot a wolf. Mortally wounded, it condemned his thoughtless killing with “fierce green fire” in its dying eyes.

It was a transformational experience for Leopold looking back on his life, and represents a time when he began to think of himself as part of, not apart from, the rest of nature.

And so Green Fire was a well-chosen name for the Leopold commemorative film from a few years ago that celebrated the impact of the “land ethic” of this writer-conservationist. I highly recommend it to you as educational, informative and inspirational.

“Fierce Green Fire” is a very new film whose name is easy to confuse with the Leopold movie.

But the green here is more than the color of a dying wolf’s eyes. The fire in this film represents the energy of an activism that in many ways owes its energy to Aldo Leopold, Rachel Carson, and those who exposed the folly of turning nature into nothing but commodity.

The Floyd Country Store will be among the first venues to show this new film (Nov 9 @ 6pm). It depicts the half-century of successes and failures to live in harmony and balance with oceans, soils, rain forests, deserts and grasslands. It recounts the struggles (of too few of our kind so far) to have enough while not taking too much from the finite natural storehouse; to leave a small footprint on the land and to treat its residents (human and non-human) with justice and foresight.

That half-century of struggle, for want of a better term, is described, often dismissively as the “environmental movement.” The phrase has become emotionally and politically loaded and trivialized. It does not carry the full history or meaning of either term.

For those of us who have lived during these five unique decades of ecological semi-awareness, it’s crucial now to understand what the environment is to our species, and to understand what the movement has both moved towards, as well as the entrenched ideology and power it has pushed back against with varying success.

I am reminded, thinking ahead to next week’s local showing of this film, that this time last year I was writing along just these lines. I believed myself then to be working on a third book that I would call “A Floyd County Almanac” with intentional threads of connection to Mr. Leopold’s fierce green transformation.

I can’t say for sure at the moment that I’m still working on a book, though that may change with the long days of winter by the fire.

I can say Â I have a sense that after I have seen this new film with some of my neighbors here, the experience may kindle purpose and hope in this Age of Economics as if Nature and People Did Not Matter. Lord knows if there was ever a time we needed purpose and hope and a clear vision, it is now. Hope to see you in Floyd next Saturday night.

3 thoughts on “The History of Green”