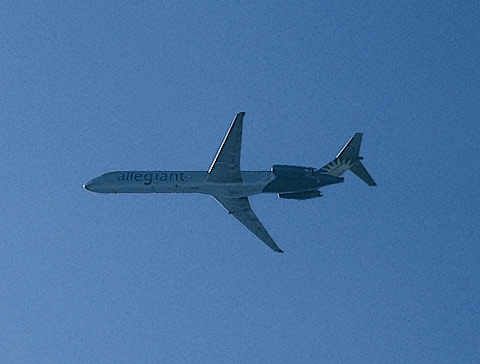 That the airlines are having problems is not news. Everyone whose flown lately has their own horror story, and things–what with the meteoric rise in fuel prices–will only get worse.

But then again, maybe they’ll be getting better, at least in that with fewer flights there will be less jet fuel and CO2 pollution.

A “shock report” by the Aviation Environment Federation gives expected aviation CO2 emissions that “run the severe risk of overwhelming all CO2 reduction targets.” Your car in 2020 may be far more efficient and run on alternative fuels; the jet you take to see your sister won’t. And, of course, these huge amounts of jet fossil fuel are deposited directly into the upper atmosphere forming an instant greenhouse-gas haze.

“Aviation is a rogue sector and its environmental impact is out of control” said Friends of the Earth director Tony Juniper.

With regard to the expected UK increase in jet traffic until 2050, a recent study states that “UK homes, firms and motorists will have to cut carbon dioxide emissions to zero due to air travel growth” that so far, is not playing by the rules.

The underbelly of a jet in the image above is hardly uncommon, except for the fact that I grabbed this shot between our house and barn a few days ago. We’re close enough to ROA that approach altitude from the west has already been reached over Goose Creek. But you know, come to think of it, we’re not hearing or seeing as many of these planet-foggers here as we used to.

Smaller airports (like Roanoke) are tightening their belts, cutting flights, providing fewer and fewer connectors with the major airports–which, by the way, find your increasing missed connections to their advantage. Check out how well the airport concessioners are doing lately.

How Airlines Profit From Your Wait in Forbes 3 June 2008

2 thoughts on “The Fog of Flight: Aviation Gases Up”