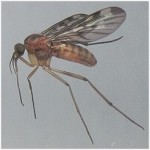 Except a film called “the Gnats!” would never have provoked the eco-paranoia of “the Birds!”

Nevertheless, the sheer number of these things all of a sudden is alarming. If they were blood-suckers, we’d look by now like deflated balloons with hair. Our few liters of blood couldn’t begin to feed this swarm, whose worst, thankfully, is to fly into your ears, and be sucked indoors every time we hurry outside or back.

So–if we must live among them, WHO are they? I’ve been going from window to window with a saved 10x screw-in close up lens I kept from my Minolta days. It’s the best I have, when a stereo-scope with a built in light would be so much better (and I would have had ready access to in my teaching years.)

I could see enough detail to be able to discern fly-like pedunculate eyes, two pair of overlapping diaphanous wings, and a few more details to start with. I guessed that a search on “gnats” would get me in the ball park.

And at the end of that trail, our visitors are Sylvicola fenestralis, called “wood gnats”, or in Europe,Â  “window gnat” which is perfect because they REALLY seem to want inside, and hang in huge numbers in the glass panes above our front door.

They are harmless. They make an ample food source for the migrating dragonflies and swallows that are passing through. In terms of biomass, our creeks have contributed considerable protein to the local food web by the larvae and adults they have spawned.

So knowing this, why was I so ill yesterday, standing in the uncommon heat, picking beggars ticks off my pants while a halo of “window gnats” looked for a door inside my head? Ah, fall.