↓ Skip to Main Content
Home › Environment › As the Birds Go

As the Birds Go 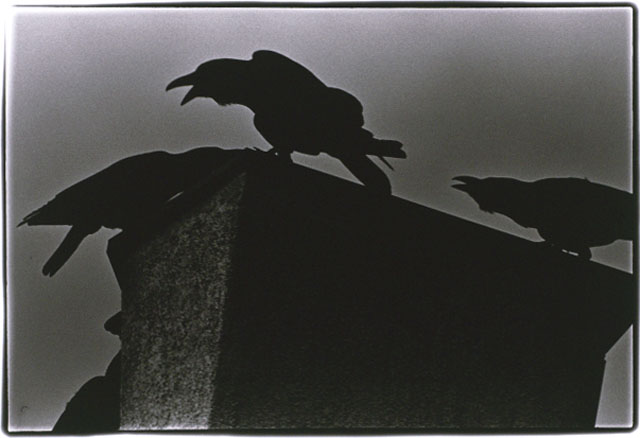 I never used to like blue jays. Or at least I pretended not to, so I’d have a cause to gather gravel from the road and shoot my slingshot at the jays that in my mind were bullies driving away the lesser birds from our backyard feeder.

Lately though, I’ve enjoyed their mobs of 8 to 10 that fly around our valley en mass scolding crows or each other, always restless, flashes of blue sky even on somber fog-ridden spring days. Until lately.

Where are the jays? There were almost none last summer. cravat

Last week, I didn’t pay much attention to Tsuga rolling in something (turkey poop, dead mole, old bone–he’s not very discriminating as long as the rolled object imparts a masculine olfactory aura of conquest.)

Turns out, it was a pile of feathers, black, shiny mostly, but in the mix was a ruff of softer feathers in a bunch, a black cravat–the chest ruffs of a raven.

Ravens. Crows. Jays. They are a group at risk these days, corvids all, and for reasons not entirely understood, they among all birds are very susceptible to West Nile virus and in some places are dying in large numbers.

So maybe it isn’t my imagination that jays have been missing, blue on blue, from our summer skies.

Recently, crows dead from West Nile have been found in winter–odd because it had been assumed that active infection by mosquitos was required. This article from CDC indicates roosting birds can pass the infection among themselves by way of active virus in their droppings AND in the mites that live on them.

Both these routes of transmission–even in winter–might potentially infect a human, so leave those dead raven feathers alone, dog!

Consider this linkage: Increasing White Nose Syndrome will mean fewer bats. Each bat dead would have eaten a good percentage of its weight in insects every summer night, many of those insects would have been mosquitos. So, more mosquitos, increased vectors for West Nile, and the potential for more dead birds (and human infection as well.) It will be interesting to see how these dynamics work out this summer. image source

2 Comments on “As the Birds Go”