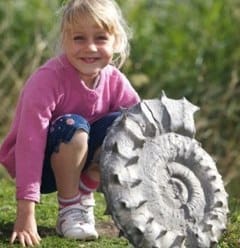 I am working on what may become a longish piece about my proclivity to see and experience nature in a fredfirstian way that is different from most–a personal “lens” that must have been hardwired and in place at birth, then altered by experiences over the early years. Nature provides the skill sets, the temperament and the senses; nurture ignites or extinguishes.

But I wonder about the subtle influences that divert the streams of our innate curiosity and energy in one direction and not another. Sometimes you can name them, more often, probably not.

I have to think that, for this young girl, her natural curiosity is being directed in very definite paths by the fact that her parents have her out on a “dig” with a plastic trowel at age 5.

But to have discovered a 160 million year old fossil and finally see it cleanly restored out of the block of mud in which it was embedded–this will surely be a life-altering experience for her. She will see the world differently because of this one important memory of discovery.

My early childhood discoveries were far less dazzling. I don’t think I ever even considered the possibility of finding fossils in my little excavation behind our garage at age 3 or 4. But in finding quartz crystals, feldspar, mica and fool’s gold, I was hooked.

If even dirt and rock could harbor such marvels, why, the rest of the world beyond our vine-covered fence must be unspeakably wondrous! That excitement and expectation never left, and two decades later, I was still turning rocks and logs Â as a graduate student, and looking at pond water through a microscope, as in awe as an explorer on the planet Pandora.

Had I not had that back yard to explore, who can say if today, I would see a tree or a stone in the same way.

And I suppose the take-home here for me is: Be careful how you bend those twigs. Even from the earliest years, your young children and grandchildren are being guided towards their future selves by the attention or neglect you offer them today. If a fossil dig is beyond your capabilities to provide, an hour turning rocks in the nearest stream is a pretty neat second choice.