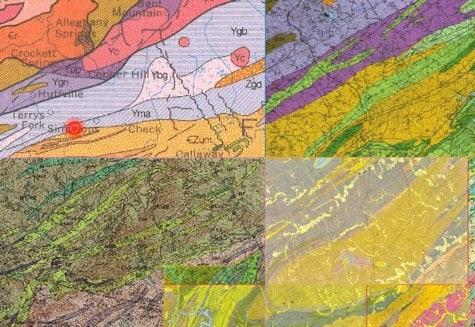 We’re talking well-aged water: like for a billion years or more: found trapped in ancient bedrock north of Lake Superior. And that ancient water may contain living organisms that came along long before multicellular life on the surface. Or so they speculate.

So I’m looking at the map in the NPR piece–the age of bedrock coded in colors. Hmmm. I’d sort of like to know what the colors mean in terms of age.

So I find theÂ USGS National Geologic Map Database and I’m in map-geek heaven. Except that nowhere on the elaborate customizable maps do I find a legend that gives me any information about what the map shows. Maybe the colors are something a geologist just knows. But for us armchair explorers, I need more information, please.

Then again, it looks like this overall map database is a long way from being standardized for anything (note the four maps that converge in the center of this screen shot), and the ages of the individual quadrangle maps are probably, well, Â all over the map yet.

So. Another science fiction storyline bubbles up in my mind, as if I ever wrote fiction: ancient trapped water is discovered, and…it contains lifeforms that are not carbon based and considered to be extraterrestrial. Or once released to the oxidizing atmosphere, the lifeforms proliferate, spread rapidly and threaten the worlds fresh water; or….

If they do find organisms, chances are they will be not too distant from the geothermal chemosynthetic autotrophs found at the boiling vents deep in the oceans. Still, that would be cool to discover that at about the same time as we resurrect extinct species like the Wooly Mammoth by currently available genetic engineering. (The jury is still out on whether that is such a great idea. DeExtinction is a whole nuther topic. See this National Geographic coverage on DeExtinction if you are interested.)

Strange world we live in. And it ain’t over. Yet.