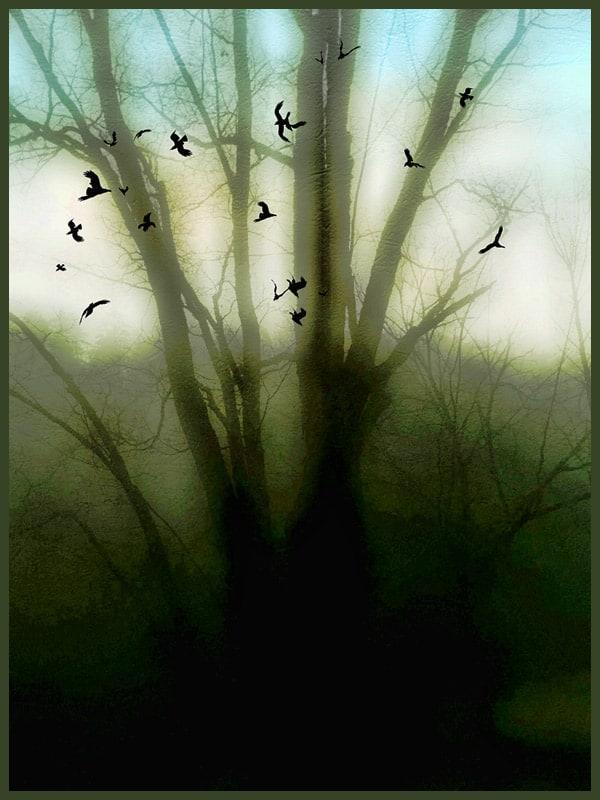 Scroll to the end for how to get rid of flocking birds. Better living through technology…

But first, a remembered gathering of blackbirds in autumn, more than a decade ago…

The house was chilly when I got home–cooler inside than out. A somber October sun only a few shades paler than sky offered little light, and less heat. I stepped into my rubber boots–a country-dweller’s slippers–for the short walk to the woodpile for an armload of kindling. A small fire through the glass doors of the woodstove would cheerify the dark afternoon, would take the edge off the damp-cold before Ann got home.

Standing in a fine mist, I zipped up my jacket on the stone walkway outside the back door, and breathed in the familiar smell of mid-autumn’s demise in a mulch of molding leaves. And then I heard it.

Truth is, the dog heard it first. His ears perked, suddenly alert. The unsettling commotion above us was not our repertoire of familiar country sounds; we put up our guard. It came from beyond the bare maples, from the near ridge behind the house.

From somewhere hidden in those young pine trees on the broken hillside came the anxious, ventriloquial voices of birds. Thousands of birds. Their angst filled the valley, louder even than the babble of the creeks.

Grackles, probably, maybe mixed with other blackbird kin–the loathsome, hapless starlings. But I could see not a one of them. Their invisibility only added to the eeriness of their thousand opinions: Listen to me! I have an idea! Let’s go that a’way! each one squeek-chirped to his incorporeal companions.

Rising, falling, they turned on their perches as each new spokesman, spokesbird, took the podium, a hundred giant rainsticks inverted over and over, tinkling waterdrop metallic voices that swelled just before they all took wing, became suddenly visible, followed the advice of the most insistent speaker; and they were gone from sight, then from sound only to rise and swirl and return to the same two trees out of hundreds of trees on the same ridge. Together, they vetoed their twentieth or twenty-first itinerary–undecided voters, uncertain of where or when, sure only that they must go, more or less south, more or less soon. And at once they flushed, and headed north.”

â–º I am expecting, perhaps this week, to spot the first uneasiness among the corvids passing down our valley. In some places, starlings and grackles gather in huge, unwelcome flocks in trees of urban parks and suburban boulevards. Banging pots and Roman candles do little to roust them from their roosts.

But this sure works. Bird brains are not prepared for any response but avoidance of a moving light that might be a predator. Lasers are being used effectively to protect fruit and vegetable crops from bird damage.

2 thoughts on “Birds of A Feather: The Flocking Part”