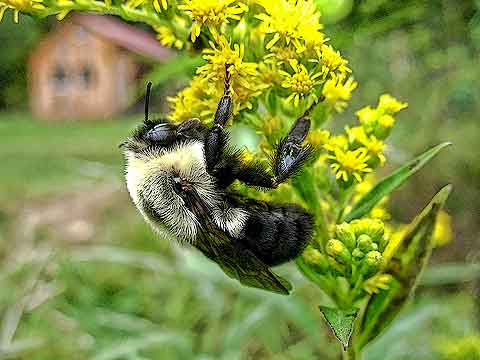 I sort of miss the latitude of topic possible when, for a brief time, I toyed with the idea of writing a novel. It was going to follow the life-unfoldings Â between two friends who diverged after high school. One’s world view grew out of a love of the land, an eye for biological detail and for the art of nature; the other, a capitalist in the worst (and unfortunately generally current) manifestation of the word.

Every morning’s web browse produced yet another possible plot element that sounded like fiction, but was fact. It was not hard to weave in the consequences of the mis-use of benign-by-design technologies–designed for good, Â and diverted for evil purposes, as alas, all will ultimately be, given enough time and availability to Everyman, The Wannabe Terrorist.

Robobees would have gone into that list, along with miniaturization of surveillance drones, a category I’d already set up.

Here’s the answer to Colony Collapse: build mechanical bees that don’t succumb to disease. Some day, that apple orchard across the road from you will be abuzz with thousands of tiny robots. Some go rogue. You were warned.

Another category was zoonoses-pandemic. This is a dead-horse topic here, not because it has ceased to be high on the radar of more than obscure bloggers. So the link below would have been clipped for the novel, in which the final crisis was going to be a perfect storm of multiple calamities, all highly likely, and happening in a chain reaction of overlapping and cumulative consequences:

First event: a power grid failure. Name your cause–decayed infrastructure because of political failure to upgrade; solar storm; or most likely, simply the inability to meet needs during an epic heat wave and drought. Spin-off from that includes inoperative sewage treatment from massive pig farms; widespread water contamination and related health issues including human-transmissable H5N1; failure of just-in-time grocery delivery; and a dirty bomb while the country is already on its knees.

But I’m better equipped to write what I know and about that which gives hope. So the Floyd County Almanac will move along pleasantly, with some reflection about local to global matters of stewardship, but mostly just a “memoir of a biology watcher” as the subtitle may state.

The buzz: Flying robots may get bee brains – FutureTech on NBCNews.comÂ