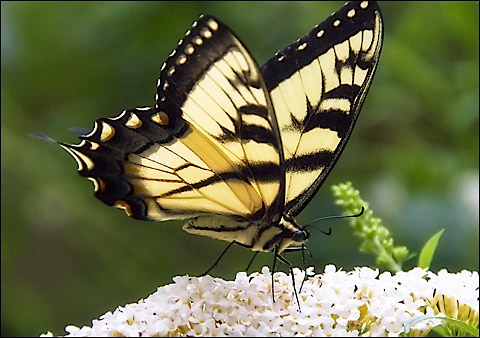 Summer of 2011: Tiger Swallowtails have left the building

It has been interesting to discover that we are not the only butterfly-free zone this summer. But a few dots on the map does not shut the lid on a theory that something large-scale is happening.Â Fluctuations in populations of some insect speciesÂ in some localities in some years is certainly within normal variation, I suppose. On the other hand, we’ve seen larger-scale die-offs like Colony Collapse Disorder in honeybees and White Nose Syndrome in bats. Both started with isolated reports that grew into something much larger and more long term, and more ominous than a quick dip in numbers.

I’ve looked around some, and find that many places (often university-associated or with groups like Audubon, Sierra Club etc) have butterfly census events. Many of them are coming up in the next two weeks. So do check in your area and consider participating and then letting us know what you find in your area. A pooled super-census might give a clearer picture of the issue of our missing butterflies in the summer of 2011.

Here are a few links pulled quickly; do check near where you live for upcoming opportunities to participate in a butterfly census.

Annual Butterfly Census at Five Rivers Environmental Center (Saturday July 2, 2011) -Â Â What’s red, white and blue and flutters in the wind? Dang, there goes another one! Whatever it is, they’re flying all over the grounds. Come join our annual census of local butterflies as we gently catch, identify and then release specimens unharmed. Nets or binoculars are welcome. Call the center at 518-475-0291 to register by Wednesday, June 29.

Catch sight of some beautiful butterflies for annual census [Colleges]

Stewardship Chronicles: Butterfly Census at Waterloo MillsÂ We hosted a butterfly count at the Waterloo Mills Preserve in Devon.Â  Volunteers counted 20 species of butterflies at the Preserve.Â  While the overall number of butterflies counted was low, there was a greater diversity of species present than expected.Â  Here are the results of the count:

8 thoughts on “Butterfly Census: Where Are They?”