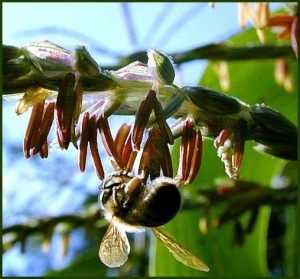 This is not unprecedented: one organism lays its eggs in or is ingested by another larger creature. The effect of this infiltration is to change the behavior of the host to the benefit of the invader.

One illustration given is “an Amazonian nematode that, once inside an ant, turns the insect’s abdomen the same bright hue as a tasty berry. The ant is eaten by birds, who spread baby nematodes through their poop.”

Blue poop is one thing. But if such a behavioral parasitism could be part of the explanation for Colony Collapse Disorder in honeybees, then this newly-described relationship between bees and Apocephalus borealis is of great importance.

When the fly lays its eggs into the abdomen of the honeybee, they get staggering drunk and can’t find their way back to their apartment. The baby flies don’t care and use the bee tissues for food, soon hatch, then fly off and turn more honeybees into zombies.

I have my doubts that this is widespread as a factor that causes honeybees across the world during the last five or so years to leave the hive and not come back, so that the colony collapses. There are a multitude of factors that likely contribute. I’d put my money on pesticides.

But in learning about this, I have had an epiphany of explanation of other bizarre behavior. What if the bizarre altered behavior of a certain groups of humans could be explained by a similar infestation of egg-laying, brain-sucking flies that make their victims believe all manner of conspiratorial myths as if they were true?

What if there is a Cerebral Collapse Disorder? Read about it here, then follow the story on Fox News.

4 thoughts on “CCD: A Fly in the Ointment”