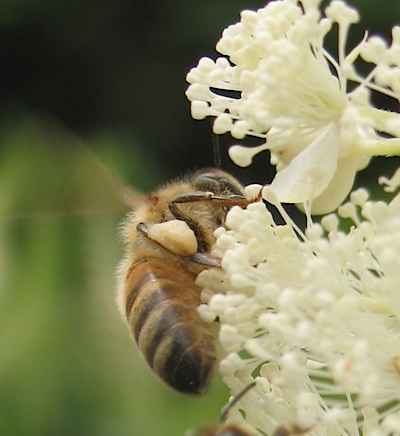 I said a year ago that my money (as if) was riding on the neonicitinoid pesticides being at least a large part of the environmental stressors contributing to Colony Collapse Disorder in honeybees. If EPA has the studies to say with any certainty, it’s not sharing. NRDC is taking the issue to the courts to find answers before the honeybees become today’s passenger pigeons.

WASHINGTON, DC, August 19, 2008 (ENS) – The nonprofit Natural Resources Defense Council filed a lawsuit Monday in federal court in Washington DC to force the federal government to disclose studies on the effect of a new pesticide on honey bees. Studies on the pesticide, clothianidin (trade name PONCHO) were ordered by the U.S. Environmental Protection Agency from the pesticide’s manufacturer, Bayer CropScience, in 2003 when the federal agency granted the company a registration for the chemical. An NRDC bee researcher and the organization’s attorneys believe that the EPA has evidence of connections between pesticides and the mysterious honey bee die-offs reported across the country called “colony collapse disorder,” or CCD, that it has not made public. The connection is important because commercial honey bees pollinate about 90 of the country’s crops, valued at $15 billion. Apples, peaches, pears, pumpkins, squash, cucumbers, cherries, berries, peppers, squash, soybeans, almonds, cashews, and sunflowers all require or benefit from honey bee pollination. The EPA has failed to respond to the NRDC’s Freedom of Information Act request for agency records concerning the toxicity of pesticides to bees, prompting Monday’s legal action.

The EPA fact sheet on this relatively new and widely used environmental toxic has the following pointer towards the (possible) smoking gun (not pointed at bees, of course, but nevertheless… That’s what “non-target” means: innocent bystanders get whacked. Collateral damage. Stuff happens. Costs of war, ya know. (And that Bayer Corporation stock you’re holding, well…)

“Available data indicate that clothianidin on corn and canola should result in minimal acute toxic risk to birds. However, assessments show that exposure to treated seeds through ingestion may result in chronic toxic risk to non-endangered and endangered small birds (e.g., songbirds) and acute/chronic toxicity risk to non-endangered and endangered mammals. Clothianidin has the potential for toxic chronic exposure to honey bees, as well as other nontarget pollinators, through the translocation of clothianidin residues in nectar and pollen..In honey bees, the effects of this toxic chronic exposure may include lethal and/or sub-lethal effects in the larvae and reproductive effects in the queen.”