I am thankful that I look forward to returning home when we occasionally travel. Imagine dreading to go back to the familiar routine. We have no such dreads. Anymore. There is that about a dual retirement plan–a recent chapter at Chez HeresHome.

It was cold inside (57 degrees) when we returned from four days with the GRANDS (and their parents of course) on the NC coast. The wood stove is cranking this morning, and it looks like it will be to some degree (!) for at least a few more weeks. But soon, we make the transition from “tyranny to the wood stove to the tyranny of the garden” as I once described it–a major tilt of the planet shift in the center of our lives.

This swing of focus from inside during short days to being outside during long days also means any writing projects I might have had underway will be co-opted by lawnmowers, string trimmers and soil amendments–and it also means hours on the porches with a book, a laptop or free hands and a receptive set of more-or-less intact senses. Life is good at least until mid-June when it grows too hot and I retreat indoors except early and late of a day.

So I have a week’s worth of STUFF for the blog, from which I’ll sift one or two that might be of interest to today’s small cluster of regulars. You know the kind of odds and ends that might end up on Fragments–or as I considered a renaming this weekend to the Breccia Blog.

The featured image is from a neighborhood margin where this certain rock is used in landscaping–as it is all along the interstate within an hour’s drive of the coast. (We stopped there on a walk to turn such rocks and found rolly-pollies for the 7-yr-old’s petting zoo.) Rushing down the interstate this rock only appears rough and gray, but on closer inspection at this pedestrian pace it is obvious that this is sedimentary rock consisting of a limestone “mortar” holding together a dense deposit of bivalve shells.

I have not yet be able to determine the age of such deposits or where along the coast they are mined. But since the original shells of some of the bivalves still persist, I’m thinking it is not old and therefore not a deep deposit, so easily quarried and sold by the dump truck load for a profit. 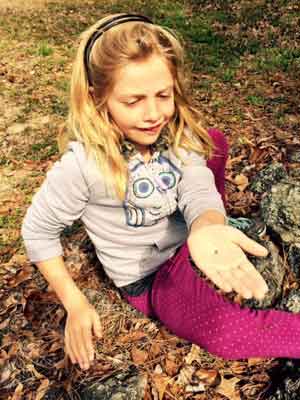 So I’m hunkered there ruminating about the history of these random chunks of sedimentary conglomerate and wondering how to learn more about them, and out of nowhere, the word BRECCIA popped into my head. I didn’t know I knew the word. I looked it up when we got little PILLY home to his new home.

Breccia, it turns out, is not quite the right word. It meansÂ  “a rock composed of sharp fragments embedded in a fine-grained matrix (as sand or clay). It typically refers to other rocks cemented into a conglomerate. But that word pulled from thin air did lead me to the more appropriate word for this kind of rock–and yes this blog is a kind of breccia. Or maybe just flotsam piled higher and deeper.

And now that I have you at the edge of your seats, here it the best term to describe this shell-packed kind of rock:

“Coquina (/koÊŠËˆkiËnÉ™/; Spanish: “cockle.”) is a sedimentary rock that is composed either wholly or almost entirely of the transported, abraded, and mechanically-sorted fragments of the shells of either mollusks, trilobites, brachiopods, or other invertebrates”