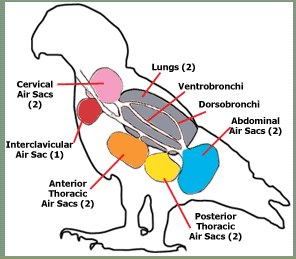 I see that somebody asked that question in a forum online. It met with dismissive and incredulous ridicule. But I KNOW why that curious person asked, because, while knowing a bit more about avian respiration from comparative anatomy days, I wondered why I was seeing the rhythmic puckering of our hens’ rumps. I assumed it was not digestive but probably somehow related to their breathing, and I think I’m right.

Chickens (and all birds) have a respiratory process that is quite un-mammalian and not surprisingly related to their high metabolic rate and the physics and blood chemistry associated with flight. Their lungs are not like ours, lacking the tiny permeable alveoli where gas exchange takes place.

Bottom line (and then you can read more fascinating details about bird breathing) is that what I think I’m seeing is the filling and emptying of the abdominal air sacs that fill the posterior gut near the feathery puckering poop-port. So, dear forum member, no, they don’t breathe through their butt, but their breathing accounts for why you ask your question, which is not a stupid as it sounds, after all.

Expiration is not passive, but requires certain muscles to contract to increase the pressure on the air sacs and push the air out.Â  Because the sternum must move during respiration, it is essential that it is allowed to move freely when a bird is being restrained. Holding a bird “too tight” can easily cause the bird to suffocate!

Because birds have air sacs that reach into the bones, and have no diaphragm,Â  respiratory â€¨infections can spread to the abdominal cavity and bones.

Bird lungs do not expand or contract like the lungs of mammals. In mammalian lungs, the â€¨exchange of oxygen and carbon dioxide occurs in microscopic sacs in the lungs,Â  called â€¨’alveoli.’Â  In the avian lung, the gas exchange occurs in the walls of microscopic tubules, â€¨called ‘air capillaries.’

From…Enchanted Learning Birds breathe using a unique system in which air follows a one-way route through the respiratory system. This system is unlike our lungs, in which the air backtracks where it came from. Their system of respiration (breathing) is very efficient – much more efficient than our system.

Birds have two relatively small lungs (where gas exchange occurs), but the lungs are augmented by bellows-like air sacs (where no gas exchange occurs). These air sacs keep the lungs perpetually inflated (even when the bird is exhaling). Our lungs alternately fill and empty out. The bird’s respiratory system takes up 20% of a birds’s volume (our respiratory system takes up only 5% of our volume).

In the bird’s respiratory system, air first flows through air sacs (located even inside their hollow bones) that direct fresh, oxygenated air into the tube-like lungs (parabronchi, where gas exchange occurs) both when the bird inhales and when it exhales.

This system increases birds’ respiratory efficiency and gives them enough oxygen for flight.

4 thoughts on “Do Chickens Breathe Through Their Butts?”