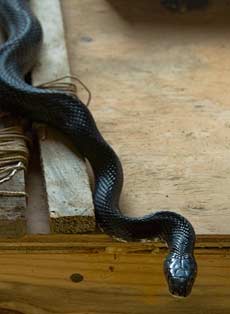 Our hens are giving us NO eggs lately but I discovered one of them nestled in the weeds on a well-concealed nest behind the garden mid-day and was sure I’d find at least one egg there later in the evening. Nope.

So I stopped by the hidden nest the next morning after the hens had been out an hour or two, just to see if maybe I could snag a warm, fresh egg. And now I know what’s happening to our free-range eggs lately: the same well-fed king snake I met in the garden shed a few weeks back is experiencing a cholesterol spike.

He was coiled up in the nest like he owned the place. With my approach, he slowly began to slither off into the thick brush. I grabbed his tail just as it was about to disappear into the tall weeds. His invisible front half, meanwhile, coiled around the vegetation, giving him a good grip to counter my pull in the opposite direction. A GOOD grip.

So there I stood holding with what I’d guess was about 25# of resistance, the snake’s body as straight and taut as a hoe handle, neither one of us budging an inch. I tried to imagine what that stand-off would have looked like to a passing car. Finally, I outlasted him and he began to release his hold on his anchor.

I swung him out into the yard to see exactly who I was dealing with here, holding him briefly on my outstretched arm at shoulder height; he reached the ground easily from that level. His egg diet has made him a record specimen, the result of HENS…Herpetological EggCentric Nutritional State. (You’ll not find this in the ICD9 book). He is somewhat better than 60 inches in length, and one thick muscular fellow, by virtue of his high-protein body-builder’s diet.

During our tug of war, I made a point to hold him behind the vent. Even so, he managed to anoint me with snake stink, with which the dog later on was most impressed. And I’m thinking we have a candidate for the Goose Creek Snake Relocation Program. I don’t want to kill him, but I’d like him to find another way to put food on his table than the eggs that should go on mine.

13 thoughts on “Egg-Suckin’ Snake in the Grass”