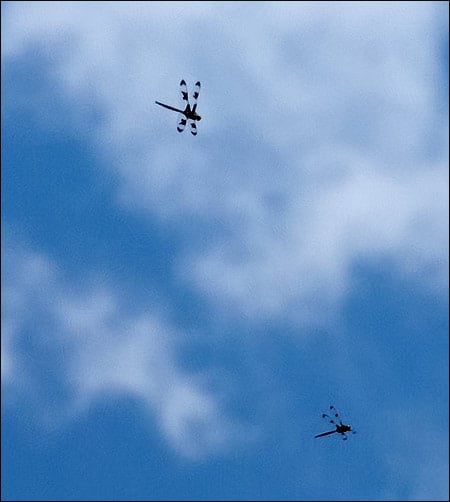 Late and early in the day, I enjoy watching the angled light fade from the ridges, bottoms to tops, and the creatures of the blue hours of dawn and dusk dominate the sky over our pasture, barn and garden.

With all the snows and spring rains, the creeks have held better than usual against the rain-sparse summer months, and our aquatic insect population is, as Garrison would say, above average.

And in the way that wolves increase when rabbits and mice are plentiful, the predators of the skies–the several varieties of dragon- and damsel-flies, also arising from water hatchings–are more abundant than I’ve ever seen. With all the mayflies, midges and beetles on the wing, our odonates are eating well.

But after admiring their aerial acrobatics several days in a row, it dawned on me (or dusk-ed, I can’t recall which) that in a normal year, the dragonflies would not be the only predators on the wing: there should be bats. I thought back and could recall seeing only one or two so far this summer.

It’s one thing to read about the crisis in biodiversity, and another to see it (or NOT see it) in one’s own back yard. It’s entirely possible our absence of bats is the result of White Nose Syndrome.

Just this week, another bat–the Virginia Southeastern Myosotis–has been added as the 9th species in 14 states to suffer marked mortality because of White Nose Syndrome, a disease about to enter its fourth year unexplained, uncontrolled, and possibly uncontrollable by any practical measures until it has run is uncertain course.

Meanwhile, the gnat population is worse than I can remember. The dragonflies make a difference, but bats are the X-wing Warships that would normally take the lion’s share of flying insects on the wing, all night long, after the cold-blooded dragonflies have clocked out.

There are many, many living systems and species (or entire classes of animals) in ill health these days. I think about this early and late, when I see empty sky where bats should be.