The self-regulating, finely-tuned, ancient homeostasis of the world as it once was is an amazing thing to reflect upon. I’ve been witness to the unfolding of so many of these stories since beginning an academic look at the world of life.

Over the decades I’ve seen many retrospective studies of precisely-working habitats or biomes that rose into our awareness only after and usually because they had stopped working so well, more often than not, because humankind, by addition or subtraction,Â  had altered the delicate balance that had sustained that web of energy, nutrients and creatures for millennia.

And since Rachel Carson first sent out the terrible news that, yes, one species could alter the chemistry and physics of a planet, we’ve seen rain forests, boreal forests, coral reefs and estuaries, prairies and wetlands rearranged to suit those who have other purposes for these places such that the old order has to go.

In the Anthropocene, it has been proposed that we change the way we understand these large biological domains once known as biomes. Our grandchildren may know them as anthromes.

So with that rambling preambling, I point to Robert Krulwich’s tale of a feeding chain that defies what we thought we knew about the shape of food pyramids. Click the image below (by Mr. K) to read the NPR piece. 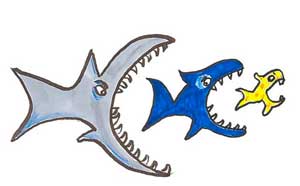 And as it turns out, as the whales go (or have long gone) so goes the ocean’s food market including phytoplankton, zooplankton and krill–the bottom and basis of nutrient stocks that keep the ocean’s myriad creatures up-chain going and healthy.

Turns out, whales have had their cake and eaten it too. Read this account of how iron cycling was once heavily subsidized and sustainedÂ by whale pooping.

And I think back to FloydFest nature hikes where invariably when I spoke about some less-than-beautiful less-than-apparently-helpfulÂ  plant, someone would ask “What GOOD is it?”

And I would suggest we approach that question with great humility and confess we are often ignorant of the answer.

What good is a whale, after all?

1 thought on “Fearfully and Wonderfully Made: The Whale Poop Story”