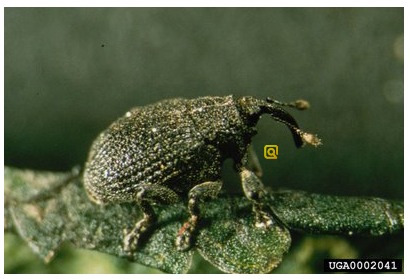 We didn’t know we might need the services of the Univoltine Root Mining Weevil, but such is the case. Suppose, then, it is a good thing our pervasive pesticides have missed this little guy. link

While he looks formidable, he’s only the size of the letter “o” in 12 point font, they say. But we may be talking about large numbers of them needed to do their job: ridding the place of a European invader you may not even have noticed. Or smelled.

Garlic Mustard–botanically closer to the latter, a member of the “Cruciferae” to us elder botanists and a good name. It’s flowers, as exemplified by this example, often form a CROSS with their four equal petals. The heart shaped leaves are distinctively shaped, but if you are in doubt, pluck, crush and sniff. There will be no doubt you’ve discovered the “garlic” part of the name. 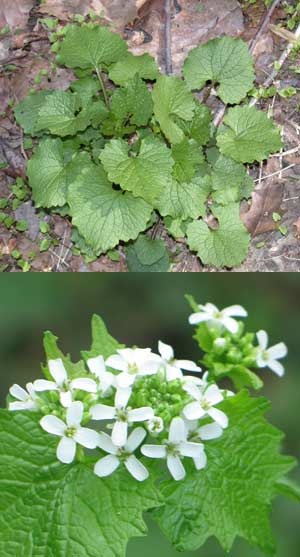 Alliaria petiolata–what a pretty name. And not a shabby looking thing either, except for the fact that, especially in “disturbed areas or forests with high deer populations.” it is spreading like crazy, outcompeting native flowering plants for sunlight in forested clearings and along roadsides in Floyd County–and from as far south as Georgia and north to Alaska.

Garlic mustard poses a severe threat to native plants and animals in forest communities in much of the eastern and midwestern U.S. Many native widlflowers that complete their life cycles in the springtime (e.g., spring beauty, wild ginger, bloodroot, Dutchman’s breeches, hepatica, toothworts, and trilliums) occur in the same habitat as garlic mustard. Once introduced to an area, garlic mustard outcompetes native plants by aggressively monopolizing light, moisture, nutrients, soil and space. Wildlife species that depend on these early plants for their foliage, pollen, nectar, fruits, seeds and roots, are deprived of these essential food sources when garlic mustard replaces them. Humans are also deprived of the vibrant display of beautiful spring wildflowers.

Garlic mustard also poses a threat to one of our rare native insects, the West Virginia white butterfly (Pieris virginiensis). Several species of spring wildflowers known as “toothworts” (Dentaria), also in the mustard family, are the primary food source for the caterpillar stage of this butterfly. Invasions of garlic mustard are causing local extirpations of the toothworts, and chemicals in garlic mustard appear to be toxic to the eggs of the butterfly, as evidenced by their failure to hatch when laid on garlic mustard plants.Â  link

So the biocontrol folks at USDA seem to be thinking this little weevil won’t mistake our target mustard for a close relative–like cabbage or broccoli in your garden. How these little beetles might be distributed is something I’ll investigate. I’ll get back to you when I know more.

Meanwhile: many parts are edible. If you can’t like’em, eat’em.