↓ Skip to Main Content
Home › Environment › education › Geometry of Life: Sacred or Practical. Or Both?

Geometry of Life: Sacred or Practical. Or Both? 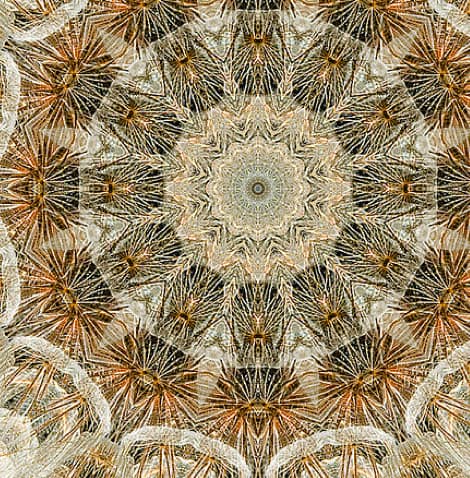 Humanity’s fascination with shapes and patterns might have started with a knotted rope, a stake and a piece of chalk.

Early doodlers discovered circles could be drawn in the sand. Circles could overlap circles, and their radii and centers and connecting lines began to reveal patterns never before seen to human eyes. Shapes seemed to arise from invisible space, once the mathematics of form gave us vision to see it.

Golden spirals and rectangles and “Platonic solids” soon permeated humankind’s incipient arts, architecture, music, city planning and sense of space. We saw it in nature and in our own form.

So pervasive is the mathematics of pattern and form in the universe, from the subatomic to the cosmic, that some have called it “Sacred Geometry.”

I both agree and disagree with this description, and am having this discussion with some folks who are looking at SG as a way of teaching an awareness of shape and pattern inÂ  graphic design and photographic composition.

I guess my ultimate question is what rules give rise to the patterns? Some elevate the patterns to the level of first causes, and I disagree.

You can find all sorts of wildly-speculative conjecture out there on Sacred Gemetry–and not a few justify the importance of complex geometry at work in the cosmos by showing as evidence the complex mathematical crop circles left for us by beneficent aliens. Ahem.

Some show rightly the role that efficiency of “close packing” of matter has played since the beginning of the material universe, and is still apparent in what we continue to learn of atomic and subatomic architecture, which is remarkably explicable by shapes structured around the square root of three. Even atomic nuclei and inorganic compounds follow these “rules”–as they must have since that first wink of TIME and SPACE.

I highly recommend this series of four short videos on “the Geometry of Life.” Jump to the forth if you’re impatient.

But behind all of this, there remains a first cause: at the infinitesimally small bit of time (TIME being a new property that came into being just then) after the Big Bang, was this organizational-efficiency “rule” already somehow programmed into what would become matter. On the other hand, some would say this “close packing” and its mathematical architecture a mindless derivative property of self-organization that was instantly at work to bring the cosmos to its present state.

Yeah I know. Too geeky and cerebral for life as we know it. Most especially a blog from the edge of the civilized world. Sorry. But not much.

2 Comments on “Geometry of Life: Sacred or Practical. Or Both?”