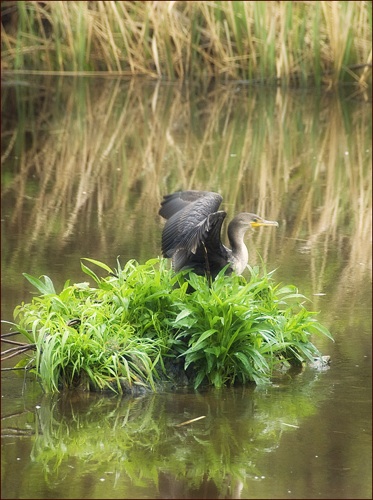 Last week we took the rare discretionary trip that had both a purpose and an excuse. The purpose, to see some favorite Floyd Occasionals who otherwise live near the SC coast near Myrtle Beach. The excuse, to present my little Dog and Pony show to a local Audubon chapter to which a friend of theirs (and now ours) belongs.

As our timing would have it, the weather was mostly not compatible with beach walking or bird watching or botanizing–which broke my heart. We (and especially Ann) had a refresher course on the meteorological term “chill factor” but ended the tutorial just short of hypothermia–on a moving pontoon boat in the rain from which this photo of a drying cormorant was taken. We learned a lot about the 18th century rice plantations that in the early 1930s became a part of the Huntington estate that now includes Huntington Beach and Brookgreen Gardens, more about which another time.