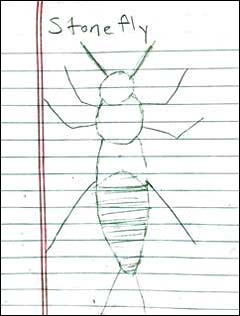 How great it has been to have open windows at night and water sounds all the way into official summer. That hasn’t always happened. In 2002 this time in June, there was only silence.

We celebrated our water wealth when the grand daughters were here by discovering aquatic insects in Goose Creek.

I assigned them to draw based on google images of the insects 1) a mayfly; 2) a stone fly; 3) a caddisfly; and 4) a water penny. (That’s Abby’s stonefly picture I found yesterday.)

Then with Â our illustrations as guides we went out under the bluff and found each of these insects, collected them in clear plastic containers, talked about them, and turned them only slightly traumatized back into the stream.

We wished that every stream was as clean and full of life as Goose Creek, but this is far from the case.

Watch this short video on Appalachian salamanders that are disappearing rapidly due to climate change, mountaintop removal, habitat destruction, and pollution. Regarding the latter, as the honeybees go, so go the mayflies.

Less than 1 part per billion of the neonicotinoid imidacloropid in streams is enough to kill mayflies. Not just honeybees.