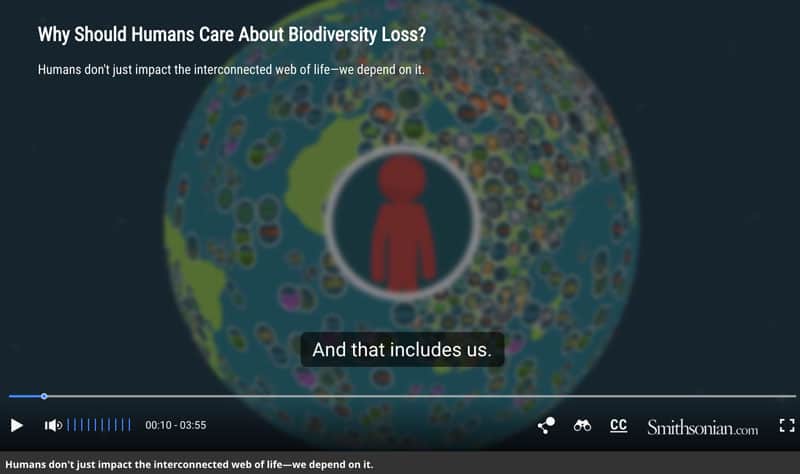 There was a time when we could pretend to not know it was short-sightedÂ to let tongueless buffaloÂ carcasses rot by the millions. Or shoot passenger pigeons for sport. Or wipe out all top predators because we had the notion the world would be a better place without them.

There was a time when humankind could depend on business, more or less, as usual, over the long term of our short history. That long calmÂ was called the Holocene–the term that geologists use for that period of 15 to 20 thousand years after the last Ice Age ended. The biology of the planet is no longer more-or-less stable.

And now there is the Anthropocene, when we know that our numbers and our urges and the two-century toiling of our carbon slaves have displaced or extinguished not mere populations of plants and animals but entire species; even higher taxa are imperiled. And as each of them winks out, the landscape changes in ways often not visible in a single blink of a human lifetime.

This Great Decline–the Sixth Great Extinction–goes barely noticed by too many that think this place and this time is all about them. To any of those types, I urge you to watch this very simple explanatory movie from Smithsonian on for why you should care about loss of biodiversity. The filmmakers explain Â it with their tagline: humans don’t just impact the interconnected web of life. We depend on it. Do you get that? Do you?

Most cases are not as clearly demonstrative of this truth as the wolves’ visible impact on ecosystems. To truly comprehend the magnitude of lost species, we have to be, on average, much better informed about the science of life that we share in common with those vanishing fellow creatures.

Meanwhile, science-challenged Americans are so distanced from the living world that nature has become an irrelevant abstractionÂ that exists in zoos, museums and on certain television channels.

Richard Louv coined the term “nature deficit disorder” a decade ago. Today, the phraseÂ describes not just the de-natured plight of our children but a nation-wide root cause–especially at the highest levels of corporate and political power–of many of our most critical threats to the integrity of what must be, for those who come after us, a house in order.

We can perhaps yet slow the precipitous rate of biodiversity loss, even in an era we have allowed to overtake us where atmospheric chaos will be sufficient challenge to the human future on Earth.

End of the Age: A Splendidly Disturbing Time
Nature Deficit and the Anthropocene
Economics as an Environmental Discipline?