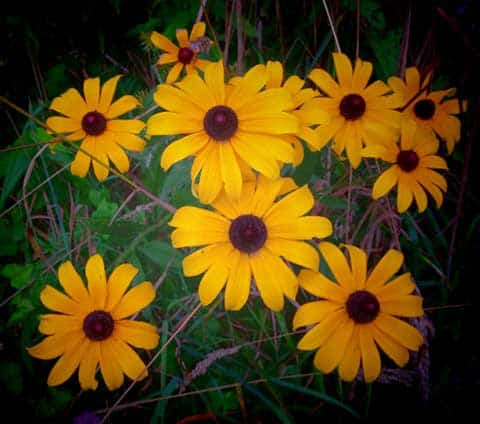 I mentioned recently that I had this question asked more than once on the recent nature walks at FloydFest when I focused attention on any given plant or animal. What good is it?

I can’t know what was in the mind and understanding of the person asking this question. The motive could simply be practical: the need for an immediate memory connection, so as to make this newly-named thing relevant in some way to their daily lives: can I eat it, make something with it, smoke it or make something with it?

Surely, in the lives of the early settlers to this part of the world a plant or animals usefulness was reason to get to know it, to seek it out or to avoid going near it. Most of us only want to partake of nature’s bounty after it’s been shrink-wrapped and pleasantly displayed in the local BigBox grocery showcase. So for most people who ask “what’s it good for?” this may really be asking “can this creature be turned to a profit?”

What right does this organism have to exist if it does not have an immediate benefit for my nutrition or my bank account?

My sense is that most people ask “what’s it good for?” because they are looking at nature from a very human-centered point of view. Â Nature is all about US. It is here for the purpose of being useful to us, and if we cannot explain its usefulness to the human economy, what right does it have been to exist at all?

In some ways, people can be forgiven for their blindness to the value of nature, because we’ve done a very poor job over the last 100 years of assigning values on the positive side of our ledger for the contributions of an intact nature working in the background of the human culture.

Tomorrow’s economics will, of necessity, assign an appropriate dollar value to the roles that nature’s processes play in our overall well-being and to our success (or failure) as a species. And corporations and governments will be rewarded to the extent to which they support and sustain those services (the water and air cycles, estuary nutrient exchange, fisheries and forest health, soil building and organic processes etc) and penalized according to the extent to which they make these benefits less sustainable and healthy.

The fact that species x is here today and has been a part of its local and regional ecology for many times longer than homo of any species has been on the planet argues in favor of its rights to continue to exist, whether we can smoke it or make it into a casserole.

Species x is integral to a flow of matter and energy that has been in operation for vast stretches of time. We cannot dissect it out of the living fabric of nature and stand in judgement to say Yay or Nay to its continued existence.

And yet this very judgement is happening daily, as much by what we don’t say or do as by acts of intention motivated by profit or politics.

We are in the very midst of the “sixth great extinction” to occur on this planet over the 800 million year span of life on Earth. By our indifference and by our enormous environmental footprint, extinction rates are orders of magnitude higher than during the prevailing stable periods of biodiversity. Human caused disruption is far and away the greatest cause.

And it will only be after they are gone that we may be around to say in hindsight what nature’s cast has done for us lately. And it will be too late to bring them back. Even then, nature will heal and go on without us. We can’t go on without it.

5 thoughts on “Nature: What Have You Done for Me Lately?”