Predator-Prey on Parade: Troubles in Paradise 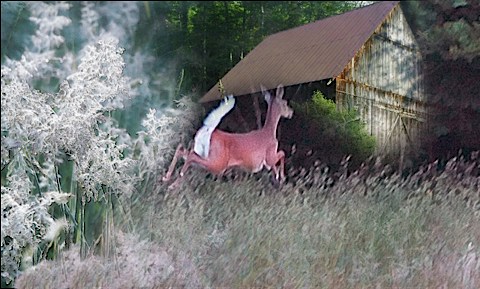 Thankfully, we didn’t have mice doing windsprints upstairs last night. But we did have much larger wildlife very, very close. Let’s just say the Wild Kingdom did not make for a restful night on Goose Creek. The dog not uncommonly barks in the wee hours in the direction of the side porch (where the wrens live) and it is (we assume) deer marauding near the house, eating the hostas and other obnoxious things they do. But last night’s bark-snarl-growl at 1:30 was more urgent, and I couldn’t roll over and go back to sleep. Instead, like I was shot from a cannon (oh my back this morning) I sprang up to see what the fuss was all about. The dog was barking in the direction of the open kitchen windows (open–a mistake: it was 60 degrees inside this morning) and I could hear some kind of commotion out there in the full moon silver darkness. So I went to the back door, and flung it open as to call down a pox on the deer in the abstract, and there one stood in the flesh (in the venison?)– a large doe almost with its front feet on the porch boards, staring at the window where had the window been open from the bottom, the howling dog and deer five feet nose to nose I think one of them would have come through the screen. I stood there, the deer stood there, not a dozen feet away. I spoke. The deer said nothing. Was this a psycho-deer contemplating attack? (Check out the image!) I made as if to step down onto the pavers, the deer broke for cover, white-flag tail flashing in the light of the full moon a bit west of its zenith for the night. Now that was strange. Was the deer demented in some way? Have they finally lost their fear of man that the will soon be nuzzling our pockets to get the dog treats when we walk around the pasture margins in the afternoons? As I turned to go back to bed, there was still way too much commotion outside. I stopped by the front door and opened the door out onto the porch. Were it not for the moon, I’d have seen nothing and heard little. But what I saw were at least two silver flashes running one behind the other across the “yucca flats” along the road below the porch. Whatever it was, they were very fast, smaller than deer, and lighter in color. And I got the feeling there were more than two. The not-too-distant howl a half hour later (after the adrenalin had finally subsided and we’d gotten back to sleep) told us that what we’ve been dreading has happened: a pack of coyotes have found Goose Creek’s venison jackpot. We have way more newborn deer for this time of year. They are welcome to them. But could they please take their meals during the daytime, on the ridge tops, and beyond the scent-zone of our dog? Life promises to be interesting here in the coming weeks. And then, it’s deer season. Oy.

5 Comments on “Predator-Prey on Parade: Troubles in Paradise”