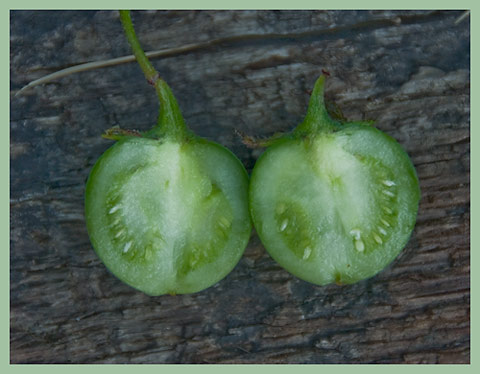 The potato (Solanum sp) is a flowering plant whose roots produce edible tubers. Duh. Everybody knows that–though the root crop’s existence and widespread northern-hemisphere use only goes back to about the middle of the last millenium.

What fewer people know is that those seldom seen potato flowers produce even more rarely seen potato fruits (3/4 inch diameter) full of seeds–not to be confused with “seed potatoes” which is what theÂ  whole potato is called in the spring before it is sectioned into pieces-with-eyes (stem buds) for planting.

In some places, the actual flower seeds of the potato plant are collected, dried and stored. The next spring, rather than relying on over-wintered whole plants that have a tendency to rot or sprout too early, the seeds can be planted a few weeks earlier than the spud pieces to grow the year’s crop.

Potato breeding necessarily makes use of the saved seed from particularly productive or resistant varieties. Bumblebees do most of the work of pollination and there is some self-pollination as well.

Note how very tomato-like the potato-fruit appears. Read lots more about the history and biology of this lowly, taken-for-granted root crop at Wikipedia.