An entry from August 4 just discovered still in draft, and by now, the first two plants featured here have mostly gone by. The Autumn Olive, though, is soon to set fruit, and I’m hoping to try some of that fruit leather! This was a Road Less Traveled column in late July. 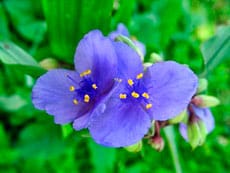 This time of year, I long for the unhindered vistas of bare landscapes we enjoy from late fall until early spring. Come July, I smother under an impenetrable blanket of summer green.

Beyond the wall of a forest margin, the world is closed to view until October. We’ll not see the actual ground of pasture or rocky spines of ridge for another few months, shrouded as they are now by the grasses, sedges, oaks and poplars and a hundred other green wrappings–and to be honest, the obscuring green curtain, plus the heat makes me just a smidge claustrophobic in July.

But I’m trying to see the silver lining on the tide of leafery that has risen around us. And this week, my attitude has improved because I’ve made a few botanical discoveries that render this green a more interesting part of summer’s palette. So I’ll share my small bits of lore and hope it will shed some light (any color but you-know-what) on what’s left of the season’s vegetative siege.

The first of my discoveries is the identity of a plant I have driven past since moving to Floyd County that was new to me when I first saw it here in 1997. And though over the years I’ve jumped out a couple of times to grab a sample to identify back home, it doesn’t travel well, it’s parts are tiny to start with, and it has stymied me–until now. You’ve seen it, and it will be around for a few more weeks before withering in the heat of late July. Look for dense stands of tall, soft yellow plants blowing at pasture edges along 221 and Route 8. You can’t miss it.

This is Yellow Bedstraw, also called Maid’s Hair and Cheese Rennet. Each of these names describes a use. Because it is a soft and fragrant plant, it was once used to stuff mattresses. The yellow dye extracted from the stems and flowers was once used as a hair dye by young women. (The root is said to produce a red dye; I’ll pull up a plant knowing that, to see if the roots appear that color.) And when added to milk, the crushed stems produce both the dye already mentioned and a curdling agent used in making cheese (though the original rennet comes from a young ruminant’s stomach.) All this is interesting, but I’m just happy this plant now has a name for me after all these years!

Then on a drive down the Parkway in mid-June, splashes of deep blue at the edges of the woods caught my attention, never at a spot where I could pull over to take a closer look. Then stopping at Saddle Gap overlook, I confirmed the mauve to blue to purple wildflower I’d been seeing was Spiderwort. I have known this plant since my long-ago Alabama botanizing days. Other names include Blue Jacket, Cow Slobber, Snotweed, Indian Paint, Widow’s Tears, Moses in the Bulrushes, Dayflower, and Trinity Flower–each of which carries a story about this plant, but not the one I want to tell. (“Wort” signifies medicinal uses.)

In 1974 it was discovered that the stamen hairs of this plant are very sensitive to both radiation and chemical pollution. These filaments consist of single cells that reproduce rapidly to create the long blue threads of the male flower parts. When exposed to ionizing radiation or a variety of chemicals, the cells mutate and change color to pink. This has been used most widely in Japan to detect both where and when air-borne radiation has spread from nuclear plants. Blue is good, pink is bad. From the sampling I’ve seen, I think we’re safe in Floyd County for now.

Lastly, I’ve been proven wrong–and finally getting things right is always a refreshing dope-slap! Autumn Olive is edible after all!

Eleagnus umbellata was introduced from China and Japan in 1830 and is considered an “invasive.” It is one of the few non-legumes that can fix nitrogen in its roots. A single plant can produce 8 pounds of fruit, and when a neighbor asked me recently to identify this bush and then asked if the fruits were edible, I said “only if you’re a bird.” I was wrong.

Look for Autumn Olive fruits (obviously by the name) in the fall just before the first frost. The silver-speckled red berries make wine, jelly and “fruit leather.” The plentiful berries are not only tasty (bushes apparently vary in tartness so taste-test first) but also are 14 times higher in the carotenoid lycopene than tomatoes. It is currently being tested for possible anticancer effects, particularly for prostate cancer. The recipe for fruit leather from the berries is worth a look!